STADLER has shipped the second of 10 GoldLeaf panoramic coaches for the Rocky Mountaineer luxury train from Germany to Canada. 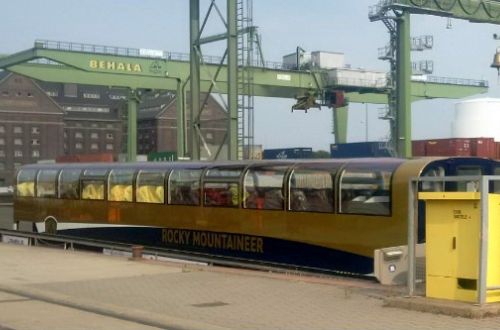 The 27m-long 5.5m-tall vehicles are being assembled at Stadler Pankow’s Reinickendorf plant near Berlin and transported by barge to the North Sea coast for shipment to Canada. Upon arrival on the US west coast, the coaches are moved by rail to Rocky Mountaineer’s facility in Kamloops, British Columbia.

The double-deck coaches feature electrically-adjustable, heated rotating seats for 72 passengers on the upper-deck, which has large wrap-around panoramic windows which can be darkened according to the ambient light level. The lower deck is equipped with a kitchen.

Each coach has two flights of stairs and an elevator, which provides access for passengers with reduced mobility.

The first coach is already in Canada undergoing tests, and the vehicles will enter service next year.