NEW Stadler Flirt 3 EMUs entered service with three operators in the Netherlands with the start of the 2017 timetable on December 11. 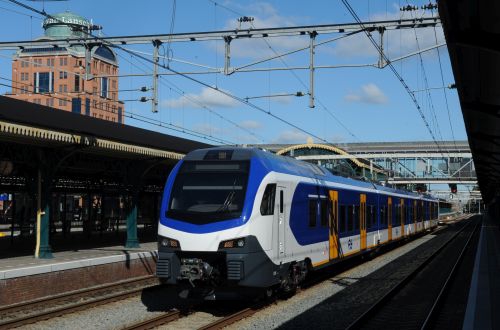 NS placed an order with Stadler last year for 58 sets comprising 25 four-car and 33 three-car trains, with deliveries due to conclude next year. Despite awarding a contract to CAF for 118 trains based on the Civity platform for Sprinter services, NS needed an urgent solution for more seating capacity as an extra increase of passengers was expected, and awarded Stadler a contract without tendering because the company was able to provide trains within a short timescale.

The NS Flirt 3s are being maintained at the Nedtrain depot in Maastricht and the fleet is initially being deployed on Nijmegen – ‘s-Hertogenbosch and ‘s-Hertogenbosch – Eindhoven – Deurne services. The trains will mostly operate in the south and southeast of the Netherlands.

Meanwhile NS subsidiary Abellio has introduced its fleet of six Flirt 3 EMUs on the 17km Gouda - Alphen aan den Rijn line. This operation is part of the R-Net network in the densely-populated Randstad region. The trains are maintained at Nedtrain’s Leidschendam-Voorburg depot and will enable the operation of up to four trains per hour between Gouda and Alphen. Two new stations will also be constructed on this line.

German Rail (DB) subsidiary Arriva Nederland has taken over operation of regional bus and train services in Limburg province, introducing a new fleet of 12 two-car and 13 three-car 1.5kV dc EMUs. Arriva Limburg will also receive eight multi-system Flirts for cross-border services to Aachen, Germany, and there are plans to develop a three-country regional service linking Liège in Belgium with Aachen via Maastricht and Heerlen in the Netherlands.

Further Flirt 3 trains will arrive in the Netherlands next year as Syntus (soon to be renamed after parent company Keolis), is due to start operating regional services on the Zwolle - Kampen and Zwolle - Enschede lines next December. Stadler will supply 16 trains for these routes.

Finally Connexxion has ordered two three-car Flirt 3s to expand its fleet on the Ede-Wageningen - Amersfoort line. Deliveries are due to start in 2018.