IRJ at InnoTrans 2022: First BEMU to be delivered in Germany. 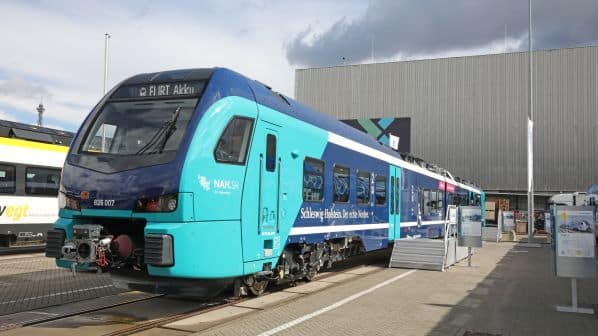 STADLER presented the first of its Flirt Akku BEMUs at InnoTrans on September 20 and formally handed it over, making it the first BEMU train in Germany to be delivered. Stadler is manufacturing 55 two-car trains at its German factory in Berlin Pankow.

The trains will enter service in the northern state of Schleswig-Holstein from May 2023. All 55 trains should be in service from May 2024.

The order placed with Stadler in 2019 also includes a 30-year maintenance contract for the new BEMU fleet. The depot will be built in Rendsburg in the centre of the state’s network. Planning approval for the depot designed by Stadler was obtained this week.

Schleswig-Holstein transport authority NAH.SH called for bids for non-diesel trains to operate routes comprising 10 million train-km annually in 2018-19. These routes represent around 40% of the state’s passenger system and are only partially electrified, with non-electrified sections as long as 80km.

NAH.SH was open to the supplier’s choice of technology and after evaluating several offers chose Stadler’s BEMU option. The state of Schleswig-Holstein has set itself the target of becoming climate-neutral by 2040 and sees the reduction of transport emissions as playing a key part in fulfilling that objective.