STADLER presented the first of 29 Giruno 250km/h electric trains to Swiss Federal Railways (SBB) at a ceremony in Bussnang on May 18 attended by the president of the Swiss Confederation, Ms Doris Leuthard, and the CEO of SBB Mr Andreas Meyer. 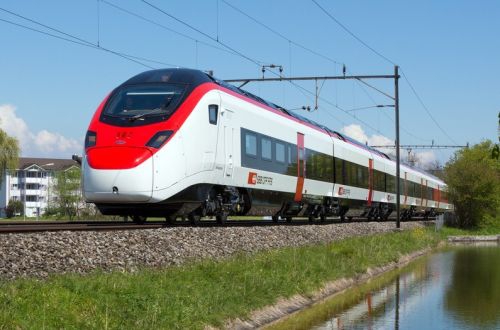 Although a five-car Giruno was on show at InnoTrans last year, this is the first 11-car train to be completed. The three-system train is designed for operation in Switzerland, Germany, Austria and Italy, although it will be deployed on the Basle - Zurich - Milan corridor which includes the new Gotthard Base Tunnel. For this reason, Giruno is designed to withstand the huge temperature fluctuations encountered when entering and leaving the tunnel in winter, with special attention being paid to air pressure inside the train, air-conditioning and thermal and acoustic insulation.

Giruno has a low-floor for step-less entry from stations with 55cm and 76cm-high platforms, which will be of particular benefit to disabled passengers who will also have access to special toilets on board. All passengers will have access to 3G/4G mobile signals through a communications amplifier, while power sockets are provided at every seat.

Each train is 202m long and has 117 first-class and 288 second-class seats. There are also multi-functional areas, space for bicycles, large luggage racks, and separate male and female toilets.

The train has a maximum output at the wheel of 6MW and four motorised bogies with each axle driven. Four pantographs are fitted to cope with the different electrification systems in each country. Two trains can operate in multiple if required.

Giruno is certified in accordance with the high-speed train TSI and is designed to meet DIN EN 15227 crash-worthiness standards.

The train will undergo tests at Rail Tec Arsenal in Vienna prior to commissioning. Giruno is due to enter service at the end of 2019, and SBB has an option for 92 additional coaches.

“Giruno is the first ever mass-produced low-floor high-speed multiple unit train,” says Mr Peter Spuhler, CEO and owner of Stadler Rail Group. “It will travel through the longest rail tunnel in the world, and it is the first train ever to meet all of the requirements of the Swiss Disability Discrimination Act. The fact that the two project teams [Stadler and SBB] were able to develop and manufacture this train in just 30 months is a sensational achievement.”