STADLER has signed a framework agreement with Koleje Mazowieckie for the delivery of up to 71 Flirt EMUs for the Polish regional operator in an order worth Zlotys 2.2bn ($US 643.7m), Stadler’s largest contract for regional trains in Poland. 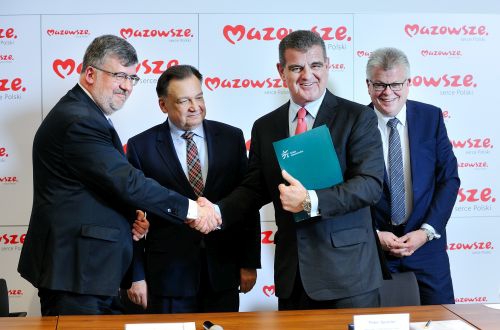 The contract was signed in Warsaw on January 17 by Stadler’s sales director, Mr Peter Jenelten, and owner and chairman, Mr Peter Spuhler, who described the order as “the breakthrough in Poland” after the company established a plant and founded a subsidiary in the country more than a decade ago.

The plant at Siedlce has produced trains for regional operations in Koleje Mazowieckie, Koleje Śląskie and Łódzka Kolej Aglomeracyjna, and for state operator PKP Intercity as well as export orders, and is staffed by 700 people.

The 160km/h vehicles will be equipped with ETCS Level 2 and will operate on lines in Mazowiekie. The Flirts will feature air conditioning, optical and acoustic passenger information and WLAN. In addition, defibrillators will be available along with an intercom system to contact the driver in an emergency.