THE first of 25 double-deck EMUs being built for Moscow's Aeroexpress at Stadler Rail's Altenrhein plant in eastern Switzerland was loaded onto a barge at the port of Basle Auhafen over the weekend on the second stage of its journey to Russia. 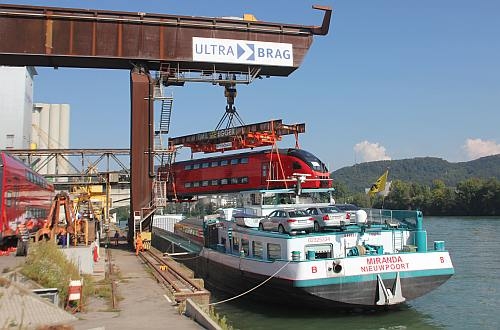 Stadler was awarded a €381m contract last year to supply nine six-car and 16 four-car Kiss trains, which will be introduced on services linking central Moscow with the city's three main airports by the end of May 2015.

The size of the 1520mm-gauge vehicles makes them unsuitable for transport on the European standard-gauge network, necessitating transport by lorry and barge. The vehicles made the 272km journey from Altenrhein to Basle by road, which took three nights. They are now being carried up the Rhine from Basle to Amsterdam, where they will be transshipped to a coastal vessel for onward shipment via the Kiel Canal to Sassnitz. At Sassnitz they will be unloaded onto 1520mm-gauge tracks and transferred to the train ferry to Klaipeda, Lithuania, before being delivered to the Stadler works in Minsk, Belarus for finishing and testing.

The first four trains will be built at Altenrhein with the remainder of the fleet being assembled at Minsk, where production is already underway.

Below: One of the first driving cars passes through Rorschach, Switzerland, on the first stage of its journey to Russia. Photo: David Gubler