ROLLING stock leasing company Alpha Trains has awarded Stadler Pankow a contract to supply eight five-car Flirt 3 EMUs, which will be used by Keolis subsidiary Eurobahn on RB61 Wiehengebirgsbahn cross-border services from Bielefeld and Bad Bentheim in Germany to Hengelo in the Netherlands. 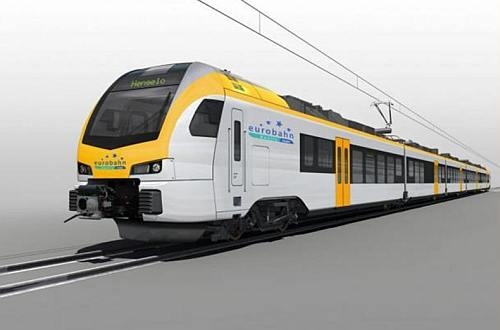 Wiehengebirgsbahn services will be operated by Eurobahn for 15 years from December 2017 as part of the Teutoburger Wald regional concession, which was finally awarded to the company by Westphalia-Lippe Local Transport (NWL) in July following an eight-month delay.

"We are pleased that Stadler will endeavour to keep the delivery date, which had been called into question because of the eight-month delay, and still support the delivery of the trains in time for the timetable change in 2017," says Alpha Trains CEO Mr Shaun Mills.

The multi-system trains will be capable of operating under 15kV 16.7Hz ac, 25kV 50Hz ac and 1.5kV dc electrification systems. Each five-car set will accommodate up to 585 passengers, 266 of them seated and will be compliant with TSI PRM standards for passengers with reduced mobility.

In addition to the new trains, Eurobahn will lease 27 existing 15kV ac Alpha Trains Flirts for the Teutoburger Wald network.