STADLER and Swiss operator Southeast Rail (SOB) unveiled the first Traverso Flirt low-floor EMU destined for operation on the Voralpen Express at a ceremony in Erlen on June 6. 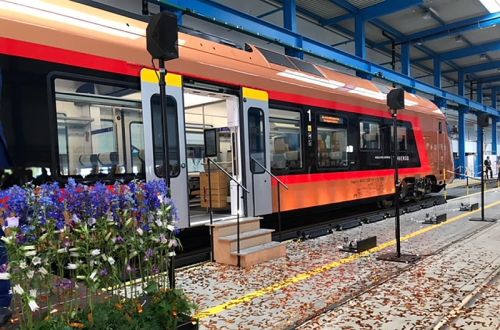 SOB awarded a contract to Stadler in June 2016 to design and build six eight-car and five four-car trains to replace the trains currently in service on the St Gallen - Lucerne Voralpen Express, some of which are 40 years old.

The 160km/h aluminium trains have a new design of lightweight motor bogie and optimised trailer bogies. The objective is to reduce wheel wear on the sinuous route.

Each eight-car train can seat 359 passengers including 68 in first class, while the four-car set has 197 seats of which 22 are first class. Power sockets are provided at each seat.

Each train has panoramic windows, areas to stow skis and bicycles, a section for families, and two catering areas. Traverso has an information system with between four and seven screens per coach. The train is designed to comply with the latest European legislation regarding equal access for handicapped persons.