GO-AHEAD Transport Germany has awarded a contract to Stadler for 45 Flirt EMUs to operate on Lots 2 and 3 of the Stuttgart Network 1 concession which Go-Ahead will take over in April 2019. 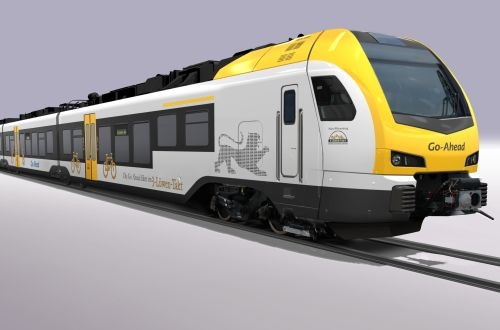 Stadler will supply 11 three-car and 15 five-car trains for Lot 2 and nine four-car and 10 six-car EMUs for Lot 3. The low-floor trains will be compliant with the Technical Standard for Interoperability (TSI) for Safety in Railway Tunnels (SRT) and Fire Protection Category B as they will operate in the new tunnels being constructed as part of the Stuttgart 21 project.

The trains for Lot 3 will be fitted with DB Networks' LZB cab signalling system and will be prepared for the installation of ETCS Level 2. The three and six-car trains will have a maximum speed of 160km/h.

Each train will have a 10-seat first-class area. The number of seats provided in second-class will range from 165 in a three-car train to 329 in a six-car set. All the trains will be fitted with a toilet which complies with the TSI for Passengers with Reduced Mobility (PRM). There will also be space in each train for bicycles, pushchairs, and luggage. The trains will be fitted with a passenger information system and passenger WLAN network.

The EMUs will operate on several lines radiating from Stuttgart to Aalen, Crailsheim, Ulm, Karlsruhe and via Heilbronn and Lauda to Würzburg.