THE board of Ile-de-France transport authority Stif has approved a €1.5bn investment in new rolling stock for the Paris region, including 72 metro trains and 29 suburban EMUs, which will be 100%-funded by the authority. 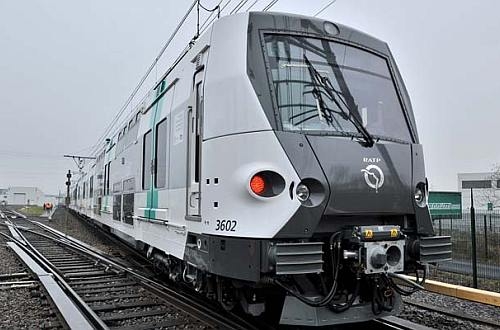 Last month Stif, Paris Transport Authority (RATP), Ile-de-France Transport Authority (Stif) and Societe du Grand Paris (SGP) signed a €2bn 15-year framework order for up to 217 MP 14 rubber-tyred metro trains. Stif has confirmed that it will fully-fund the initial order for 35 eight-car trains, which will replace six-car trains on Line 14, enabling capacity to be increased from 30,000 to 35,000 passengers per hour as part of the extension of the line north to Mairie de Saint-Ouen.

Stif will also fund a second order for a further 37 eight-car trains for Line 14, which will be required for extensions north to Saint Denis Pleyel and south to Orly Airport.

On the RER network, Stif has exercised a €150.7m option with a consortium of Alstom and Bombardier for 10 additional MI09 double-deck EMUs for Line A to provide additional capacity on the 109km east-west line, which carries around 1.2 million passengers per day.

Paris Transport Authority (RATP) placed an initial order for 60 of the five-car trains in 2009 and the first sets entered service in December 2011.

In 2012 RATP and Stif agreed to fund an option for a further 70 sets, which are currently being delivered. The trains ordered in the latest option are due to be delivered in 2017.

Each 112m-long train will accommodate up to 1725 passengers.

By the middle of January 83 MI09s were in service on Line A and the fleet has covered more than 19 million-km since introduction.

Finally, Stif will place a €177.6m order with Bombardier for 19 additional class Z 50000 Francilien EMUs for suburban Line L, which runs west from Paris Saint-Lazare and carries around 312,000 passengers per day. The single-deck trains will be delivered in 2017 and will replace Z6400 EMUs dating from the 1970s.