TEST running is underway with three 200km/h tilting sets which Talgo is supplying to Russian Railways (RZD) with a view to placing them in service on the Berlin – Moscow route next year. 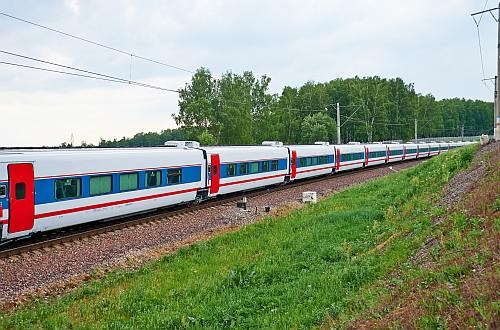 TÜV Süd Rail, Germany, is coordinating the tests which are being conducted on test tracks as well as main lines in Görlitz and Halle (Saale). The tests cover braking, running characteristics, aerodynamics, acoustics, and electromagnetic compatibility.

The Talgo trains are expected to cut the Berlin – Moscow journey time by around 30% due to their ability to use automatic gauge changing facilities when switching between standard and 1520mm gauge at the Polish-Belorussian border and due to their ability to tilt through curves. RZD intends to use all three trains during the period when Russia will host the soccer World Cup in 2018.

The only through service currently operating on the route is the weekly Paris – Berlin – Warsaw – Moscow service which operates twice-weekly during the summer months. A daily overnight service is provided between Warsaw and Moscow.