SIEMENS presented the new class 700 EMU for cross-London Thameslink suburban services to the press at its Krefeld plant in Germany on April 2, confirming that the first sets will be delivered to the new depot at Three Bridges in August in readiness for the start of mainline testing. 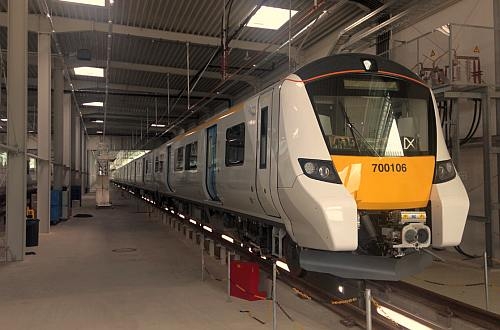 Trials using Automatic Train Operation will be carried out on the Hertford Loop north of London later this year.

So far Siemens has completed assembly of six 12-car and one eight-car trains at Krefeld and dynamic testing is underway at the company's test centre in nearby Wildenrath. By February 2016 the Krefeld plant will roll out two class 700 vehicles every working day, and the entire fleet will be delivered by June 2018.

Testing began at Wildenrath in March 2014 and is expected to be completed in July this year. The first trains will be handed over to operator Govia Thameslink Railway (GTR) in December and will enter service on the Brighton to Bedford route in February 2016.

A full description of the £6.5bn Thameslink upgrade and the new train fleet can be viewed here.