WITH the hottest part of the year approaching in Spain, Rente subsidiary Cercanías Madrid is trialling a project that uses vinyls applied to the exterior surface of carriage windows to reduce the interior temperature of rolling stock by up to 30%. 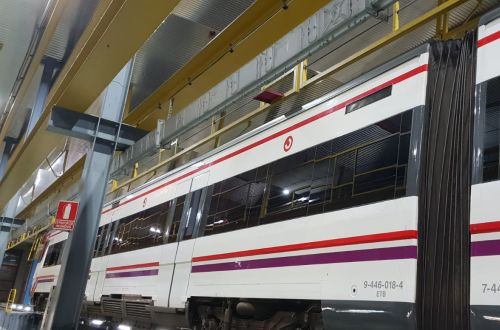 Renfe says the vinyl reduces the temperature inside the rolling stock by up to 30%,

Renfe is trialling the “solar control sheets” on 66 class 446 EMUs which operate on the Móstoles El Soto-Fuenlabrada/Humanes line (C5 Line).

With temperatures in summer exceeding 35oC, the move is expected to make the ride more comfortable for passengers and reduce the load on HVAC systems, thereby reducing energy consumption.

The vinyl has already been installed on 15 trains, with installation on the remaining 51 setsat Renfe’s workshops in Humances due for completion by the second week of July.

The sheets are installed on the outside of the glass, reducing the intensity of the heat inside the car, and Cercanías Madrid says the higher the outside temperature, the greater the reduction in inside temperature. It says the vinyl can also reflect up to 60% of solar radiation and reduce infrared rays by 97%.

Along with the vinyl covering, the roof of a class 446 which runs on the C5 Line has also been painted with a white anti-heat paint which reflects the ultraviolet rays and further reduces the inside temperature by 10oC.

Following the pilot, Cercanías Madrid says it expects to roll the window vinyls out to the rest of its fleet.