TRENORD, the joint venture between North Milan Railways (FNM) and Trenitalia which operates regional services in the Italian region of Lombardy has unveiled plans to refurbish 33% of its rolling stock fleet at a cost of €415m. 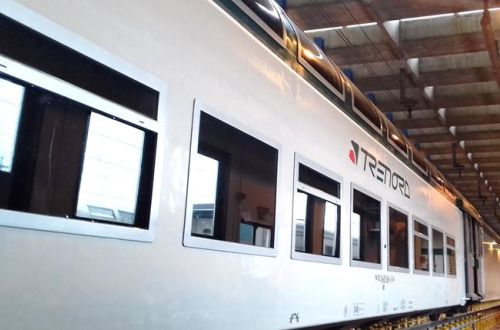 The programme involves more than 700 Trenitalia-owned vehicles, which are leased to Trenord.

It will also modernise 278 locomotive-hauled coaches, including the first-generation Vivalto double-deck coaches and medium-distance coaches, which operate services from Milan to Tirano, Brescia, Verona, Mantova, Domodossola, Voghera and Piacenza.

All vehicles will be equipped with a new air-conditioning system and electrical systems will be upgraded. Doors and seats will be replaced and the internal and external livery will be renewed.

Works will be carried out by specialised teams at Trenord workshops in Milan (Fiorenza), Cremona, and Iseo.

Trenord CEO, Ms Cinzia Farisè, says the refurbishment programme represents an unprecedented investment and reflects improvements in the financial health of the company achieved over the last three years.
Alongside the refurbishment of the existing fleet, new trains are also being procured. Last year the region of Lombardy issued tenders for 100 double-deck suburban trains for services in the Milan area, 31 single-deck regional EMUs; and 30 DMUs for non-electrified lines around Pavia, Cremona and Brescia.

According to the regional government, around 350 trains are currently used on regional services in Lombardy, around half of which have entered service since 2007. Most of the remaining trains date from 1975-1990.

By the time the rolling stock renewal programme is completed in 2025, the average age of the fleet will fall from 18 to 12 years.