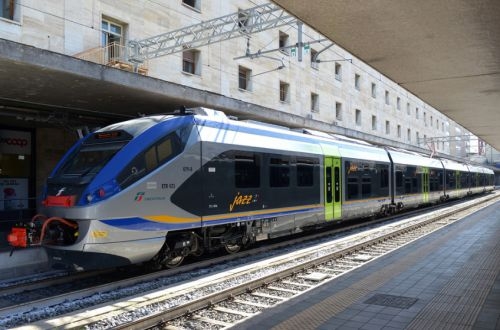 The new Alstom Jazz EMU for Trenitalia at Rome Termini.

Alstom's 15 five-car Coradia Jazz EMUs, the first of which was unveiled at Rome Termini on April 15, will operate on commuter services radiating from Rome to Albano, Frascati, and Velletri.

Each train seats 306 passengers plus two seats for disabled people. The train is equipped with CCTV, air-conditioning, and has entrances which are level with platforms.

The trains were ordered in April 2015 as a €170m option for 25 EMUs for operation on regional services in Lazio and Tuscany, and this is the first option which Trenitalia has exercised from a €470m contract for 70 trains placed in 2012.

Each train has 720 seats, 14% more than on the old trains, and is equipped with CCTV, air-conditioning, and passenger information systems. Trenitalia says the new trains will provide an additional 1620 seats per day on Line FL7.

Each driving trailer is equipped with an area for disabled passengers with a dedicated toilet, and has a device to facilitate access from low platforms. It also has a multi-functional area for the transport of bicycles, skis and bulky luggage.