UKRAINIAN Railways (UZ) suspended operation of all 10 HRCS2 emus supplied in 2012 by Hyundai Rotem for inter-city operations on February 13, with all of the emus undergoing technical checks. 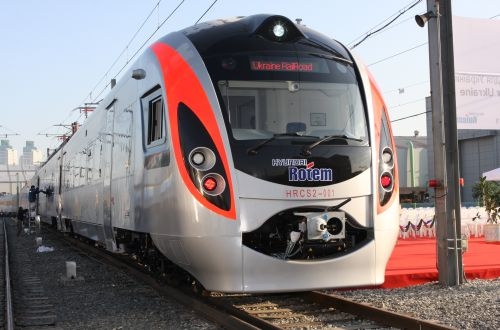 UZ deputy director general, Mr Nikolay Sergienko, says that technical problems found in one of the trains during a scheduled technical review prompted the withdrawal of the sets due to the fact that the problem could occur in the other inter-city trains. He said that UZ engineers will work with experts from Hyundai Rotem to analyse and verify the fault, and if necessary independent and academic experts could be involved in this process.

"We expect to find the cause of the malfunction next week," Sergienko says. "The trains remain under the warranty of the manufacturer."

Mr Yong Suk Choi, the head of Hyundai Rotem Ukraine, said that following unreliable performance of the trains last winter, his company performed a significant amount of refurbishment work on the trains including the replacement of all pantographs, and reinforcements of roofs.

"These measures were designed to prevent malfunctions and to improve passenger safety," Choi says. "I want to apologise to passengers for the inconvenience caused by the technical condition of the trains."

Locomotive-hauled coaches have been introduced on lines served by the HRCS2s, which operate at the same maximum line speed of 160km/h. Passengers are being offered full refunds if they decide not to travel, while refunds are available for those passengers who choose to travel in an inferior class compared with the tickets they purchased for journeys operated by HRCS2s.