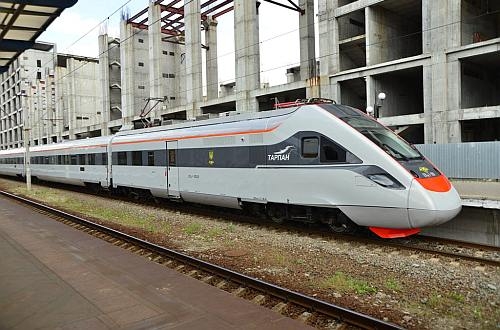 The nine-car trains, which were built by Kryukow Wagon Plant (KVSZ) in Kremenchug, Ukraine, are formed of two powered driving cars and seven unpowered intermediate trailers. Each 230m-long set accommodates 612 passengers including 128 in first class, 370 in second, 112 in tourist, and two wheelchair spaces.

The trains are equipped to operate on 3kV dc and 25kV 50Hz ac electrification systems.

The EKr1 will only operate at up to 160 km/h in passenger service, although the trains have a maximum speed of 220km/h and will be tested at this speed on the UZ network.

The second train is due to enter service on July 1 on the Kiev – Odessa line and UZ says the trains could replace Hyundai Rotem HRCS2 EMUs on Kiev - Poltava – Kharkov services.

KVSZ also unveiled a prototype DPKr1 DMU (pictured below) on June 24. The 140km/h train is being offered in suburban and interregional configurations with a two-car train seating up to 153 people and a three-car set up to 269. UZ plans to place an order for 15 of the trains next year.