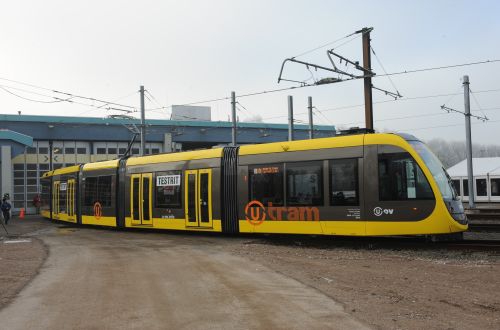 The first CAF Urbos LRV for the Uithof Line was unveiled at Nieuwegein depot on January 18.
Photo Credit: Quintus Vosman

The 41m-long seven-section articulated vehicles will be capable of operating in multiple with the 33m-long Urbos LRVs currently being delivered for the Uithof line, enabling the operation of 74m-long formations which will accommodate more than 500 passengers.

The new vehicles will replace high-floor trams on the line from Utrecht Central station to the satellite towns of Nieuwegein and IJssestein. These two car rail vehicles, manufactured by SIG, Switzerland, have been in operation since the Utrecht - Nieuwegein/IJsselstein (SUNIJ) fast tram line opened in 1983. By 2020 SUNIJ will be rebuilt as a conventional tram line and connected to the Uithof Line, which is due to open in 2018.

The contract signing took place at the tram depot near Nieuwegein, where the first of 27 Urbos 100 LRVs for the Uithof Line is on public display.

This tram is the first vehicle to be authorisation under the new Dutch Act for Regional Railways, which also covers light rail systems.

A feature on the Uithof Line will appear in the March 2017 edition of International Railway Journal.

For extensive data on light rail vehicle orders around the world, subscribe to IRJ Pro.