RUSSIAN manufacturer United Wagon Company (UWC) and Laude Smart Intermodal, Poland, have signed a contract for the supply of 200 standard-gauge Sgmmns flat wagons to transport heavy-duty containers, as UWC looks to reinforce its position in the standard-gauge market. 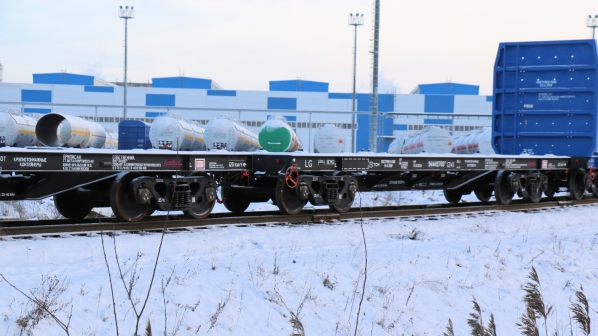 The wagons are expected to be delivered by the middle of 2020. They offer a reduced tare weight of 15.5 tonnes compared with 16 tonnes and above, which is widely available on the European market. The 12m-long wagons have a load capacity of 74.5 tonnes and are fitted with a 22.5 tonne axle load bogie.

The flat wagon was developed at UWC’s engineering centre, and the first prototypes will be built at the Tikhvin production facility. The wagons will undergo a series of certification tests at a European testing facility from February 2020 to ensure they comply with the European Union’s Technical Specifications for Interoperability (TSI) requirements, including strength tests for static load and impact, stationary and mobile brake tests, dynamic strength tests in mobile conditions, and noise impact tests.

“Developing cooperation with Laude Smart Intermodal in the 1435mm-gauge space is an important step towards the implementation of the group’s export strategy,” says UWC deputy CEO for commerce and marketing, Mr Boris Myagkov.

Earlier this year, UWC delivered 400 40-foot container flat wagons with a 25 tonne axle load to Laude Smart Intermodal to carry heavy-duty containers weighing up to 40 tonnes on the 1520mm-gauge network.