UZBEKISTAN Railways (UTY) has awarded Talgo a €38m contract to supply two additional Talgo 250 trains, which will be delivered by 2017 to supplement two sets delivered in 2011. 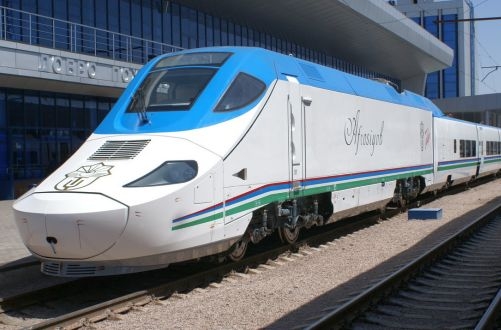 The contract, which is being financed by UTY and the Fund for the Reconstruction and Development of Uzbekistan (FRDU), was signed at the International Investment Forum, which was held in the Uzbek capital Tashkent on November 5 and 6.

The 250km/h 25kV ac trains, which have been dubbed by Afrosiyob by UTY, will be formed of two power cars and nine intermediate trailers seating 257 passengers in three classes.

The additional trains are being ordered in preparation for the extension of Tashkent - Samarkand Afrosiyob services to Bukhara. A $US 400m upgrade of the Samarkand - Bukhara line is currently underway and due to be completed in September 2016.