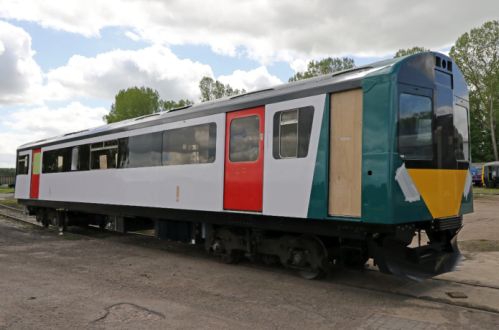 The first vehicle for the West Midland Trains class 230 order was delivered back to Vivarail at Long Marston on May 10 after painting in Derby.
Photo Credit: Keith Fender

The new battery-powered train has been developed by Vivarail at its own expense. The train is equipped with battery modules, each containing 60 24V Valence Lithium-ion batteries supplied by Lithiumwerks, which replace the diesel power-packs used on the diesel version.

The battery train has no diesel fuel tanks but otherwise features the same traction equipment, motors and bogies as the diesel variant. Two battery packs are fitted to each car instead of four diesel power units, giving a similar net weight, although the diesel train has to carry the added weight of the fuel tank and fuel.

The battery train is designed for relatively short distances with an anticipated range of 48km between charging cycles, which can be completed in around five minutes. Vivarail has developed a rapid charging system incorporating power supply via a conductor rail, which is only live when the train is stationary above it.

Early test running has demonstrated that the battery train can accelerate at around twice the rate of the diesel variant.

Vivarail says the diesel train can be converted to battery (or vice versa) in one day using a fork lift truck as both diesel and battery modules are designed around standard forklift pallet sizes. The diesel fuel tank can be added or removed as required as part of this conversion.

Vivarail has developed a diesel/battery hybrid design for the D-Train and is also working with British industrial gas specialist BOC to develop a hydrogen fuel cell version of the class 230. The company is seeking government research funding to develop a prototype train.

Meanwhile Vivarail has also commenced work on all three class 230 DMUs ordered by West Midlands Trains for use on the Bedford - Bletchley line. These are based on the original Vivarail class 230 prototype.

The three trains will be available for driver training by August with entry into passenger service scheduled for December 2018.

Prototype battery-powered class 230 unit 230 002 at Vivarail’s base at Long Marston on May 10. Photo: Keith Fender