VTG has unveiled what it says is Europe's first tank wagon for transporting liquefied natural gas (LNG) at this week's Transport and Logistics trade fair in Munich. 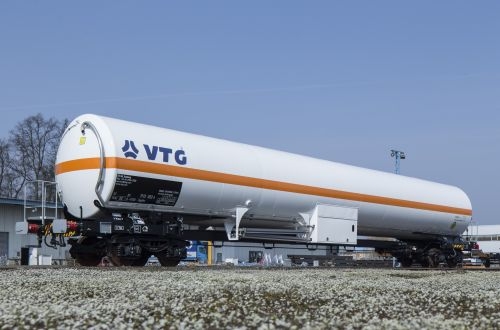 VTG has developed two prototype wagons to demonstrate its "LNG by Rail" concept, which was developed over the past three years in partnership with Chart Ferox, Czech Republic, which built the wagons.

The wagons are fitted with special insulation which allows the cryogenic LNG to remain in the tank wagon for up to six weeks, while a vacuum between an inner tank and the outer tank helps to maintain the optimum temperature of -162°C. In addition, the wagon is fitted with specially developed suspension and bearing technology that maintains the position of the inner tank inside the outer tank. VTG and Chart Ferox designers carried out extensive calculations and tests during this development process.

The German Federal Railway Authority (EBA) issued operational authorisation for the wagons in mid-April after the wagon passed all European Technical Standards for Interoperability (TSI).
VTG says there is enormous potential in Europe for using LNG as an energy source, with cryogenic LNG reducing the volume of the gas by 600 times compared with comparative pipeline transport. A single LNG wagon could replace five trucks and four containers on the road.

VTG adds that municipalities and regions not connected to a natural gas pipeline are potential customers along with industries with large energy requirements, maritime and other means of transport. Indeed VTG recently signed a cooperation agreement with Brunsbüttel Ports to develop LNG as a future fuel source.