SICILY's Circumetnea Railway (FCE) introduced its first new trains for more than 20 years on May 24, when the first of four Vulcano DMUs supplied by Newag, Poland, entered service on the 111km 950mm-gauge line from Catania to Riposto, which serves towns surrounding Mount Etna. 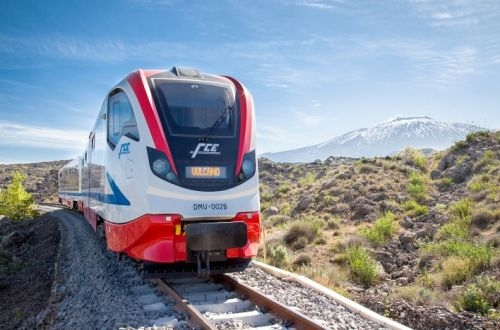 The €14.8m contract was awarded in December 2013 and represents Newag's first rolling stock order outside Poland.

Each two-car train will seat 106 passengers and the air-conditioned DMUs comply with the TSI for passengers with reduced mobility (PRM TSI). The 100km/h trains are equipped for multiple operation.

The first train was delivered to Sicily last December and each set will enter passenger service after completing 3000km of test operation. The Vulcanos are initially being used on peak services from Catania to Riposto.

The contract includes an option for six additional trains.