AUSTRIAN open-access operator Westbahn presented its new-generation double-deck EMU, the Stadler Kiss 2, to the press on May 19. 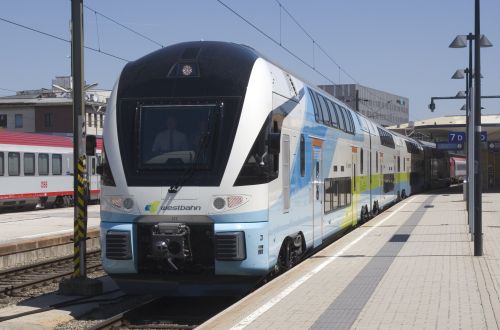 Major improvements are smaller windscreens which are screwed to the frame and not glued as before. This streamlines maintenance and a windscreen swap can thus be performed during an overnight layover at the depot. Doors are now single-leaf to improve pressure resistance, which is also aided by a revised corridor connection between vehicles and fast-closing ventilation flaps. Bogies have also been improved with softer suspension and harder roll-damping to enhance ride quality.

Inside the seating arrangement has been revised with more tables, lounge corners and additional folding seats. In first class (“West Plus”) there is now 2+1 seating in the upper deck (pictured below), while 2+2 seating is retained in the lower deck, but only one adjacent seat is sold for more comfort. First class now has individual reading lights.

Each train is equipped with two vending machines selling food and beverages.

Stadler expects the Kiss 2s to be commissioned by the end of May. Delivery of all 10 sets (one six-car and nine four-car) will be completed in August.

Westbahn intends to launch a new shuttle service from Vienna Main Station to Vienna West in June, which will connect with the operator’s Salzburg services. Discount tickets will be sold exclusively on the shuttle trains.

In December Westbahn will introduce a half-hourly Salzburg - Vienna service, with trains alternating between Vienna West and Main Station. The existing stopping pattern will be retained in the revised timetable.