IRJ at UITP 60th World Congress Geneva: Alstom has unveiled its new simplified CBTC called Urbalis Fluence which is designed to reduce the amount of lineside equipment by 20% by transferring the interlocking functions to the train. The system has been under development since 2010. 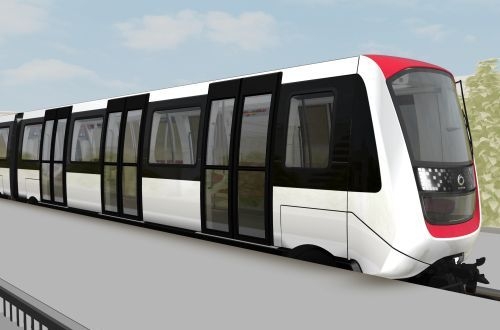 Urbalis Fluence is currently being installed on Line 1 of the Lille light metro in northern France as part a €250m contract awarded to Alstom to modernise the 13.5km line and supply 27 new trains. The new trains are expected to enter service in 2015 with completion of the project scheduled for 2017.

Up to now automatic train control (ATC) has always been overlaid on the traditional interlocking subsystem which increases complexity. Alstom's research concluded that it is possible to integrate the routing and interlocking functions on the train and on the lineside object controllers, so that track resources such as points can be booked directly by the train to the object controllers, removing the split into separate sub-systems, ie the ATC and interlocking.

Another innovation is direct train-to-train communication, for simpler communication paths and shorter response times. The moving block principle is retained with Urbalis Fluence, but there is direct communication between two consecutive trains to ensure the correct headway is maintained.

Having less equipment should reduce installation times by around 20% as well. As Urbalis Fluence is expected to be cheaper and simpler to implement and maintain than conventional CBTC, it should be a viable option for installation on monorails and automated light transit systems thereby expanding the market for CBTC. Line extensions can be equipped more easily, without impacting the vital data-preparation of existing sections.

Nevertheless, Alsom still sees a role for its conventional Urbalis 400 CBTC system. "We will offer both systems because there will be some customers who want to retain their interlockings or who have mixed traffic operation, and particularly where a customer wants to extend an existing line," says Mr Pascal Clere, Alstom's senior vice-president for transport information solutions. "We will therefore continue to develop Urbalis 400."

A full description of Urbalis Fluence will appear exclusively in the June issue of IRJ.