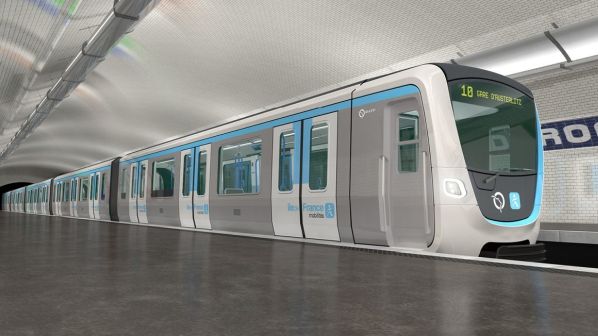 The CBTC will be installed on the MF19 metro trains.
Photo Credit: Alstom/Avant-Première

The contract includes options to equip another 47 trains for Line 3, along with 15 years’ maintenance and functional upgrades.

“Our I-CBTC solution is already in operation across 34km on lines 5 and 9, and over 80 million km have already been covered since it entered into service,” says Alstom France president, Mr Jean-Baptiste Eyméoud. “It is also being rolled out on lines 6 and 11 of the Paris metro.”

I-CBTC is an interchangeable CBTC automation system that meets the criteria of RATP for the Octys standard. Developed in partnership with RATP, I-CBTC is capable of carrying out remote operating functions, monitoring safety in operation and controlling traction and braking systems to run the trains automatically, with different levels of automation, according to the configuration chosen by RATP.

Nearly 130 Paris MF01 metro coaches operating on lines 5 and 9 are now equipped with Alstom’s I-CBTC on-board equipment. The MP14 and MP89 trains due to enter operation on lines 11 and 6 respectively will also be fitted with the Alstom system. These two lines are also equipped with an Alstom radio system to transmit data between the train and the lineside, which is part of I-CTBC.

Alstom will be responsible for the development, validation, industrialisation, installation, testing and commissioning of its on-board I-CBTC system.