A consortium of Alstom, CAF, and Siemens has begun the work to install ERTMS on the Atlantic Corridor in Galicia, the 155km-long high-speed line which connects A Coruña with Santiago and Vigo. 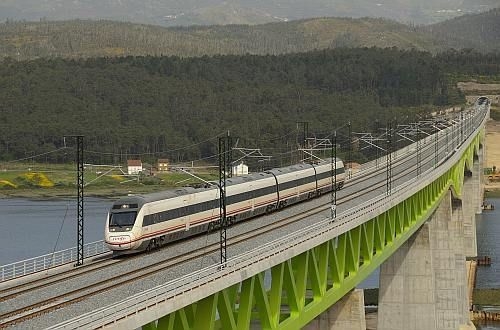 Spanish infrastructure manager Adif awarded the ETCS Level 1 contract last August, three months after the line was completed. The contract includes the installation of the traffic management system at a cost of €37.5m, along with a 20-year maintenance package worth €25m.

Alstom will be responsible for the Redondela - Vilagarcía de Arousa section, which is already equipped with Smartlock interlockings, while CAF Signalling will install its Auriga ETCS solution over the existing Quasar S3e interlockings on the Vigo - Redondela stretch.

Siemens will complete the ETCS deployment between Vilagarcía, Santiago and Redondela (with Trackguard Westrace interlockings in use), and the northernmost section of the Ourense - Santiago high-speed rail line where an Alvia train derailed in July 2013.

The introduction of ETCS Level 1 will enable Adif to raise the maximum commercial speed to 220km/h, as the Spanish Asfa train protection system currently in use limits operations to 200km/h. The project will also increase capacity and improve interoperability with the Ourense - Santiago high-speed line.

The A Coruña - Vigo line has proven to be a commercial success for Spain's national train operator Renfe, which recently confirmed the line has carried more than 1 million passengers in its first six months of operation.

Despite the latest developments, the Y-shaped Galicia high-speed network remains operationally isolated from the rest of the Spanish network. The line is equipped with 1668mm-gauge track and 25kV 50Hz electrification, with services operated by Renfe S121 series trains.