Demonstration included a stop for a broken car blocking the railway. 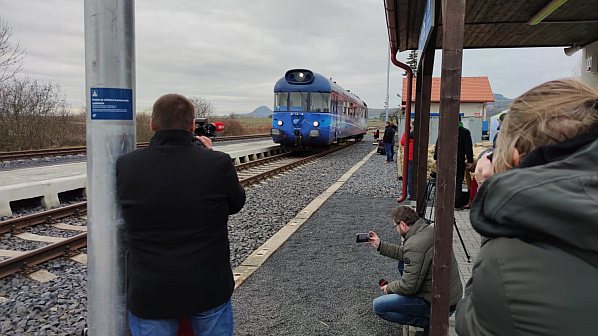 A demonstration of automated operation has taken place in the Czech Republic.
Photo Credit: AŽD/Twitter.

CZECH signalling manufacturer AŽD Praha presented what it claims to be the first public use of an autonomous train in the Czech Republic on December 15, when invited guests travelled on a single-car DMU on the Čížkovice - Most line in the Louny region.

The demonstration included the train stopping at a crossing blocked by a broken car without any intervention from onboard staff.

AŽD is working on the introduction of autonomous technology that would enable a regional train to operate without any crew, or for a driver to intervene only during specific parts of the journey.

Mr Zdeněk Chrdle, AŽD CEO, told local media that legislation needs to change to enable automated trains to operate in the country, but he expects automated operation to happen within two to three years.

“We definitely do not work with a black-and-white vision of replacing drivers, but with a vision of a modern way of operating the railway, where a number of processes can still not be ensured other than the work of a professional operator,” Chrdle says.

In 2022, AŽD will move its development and testing to the Kopidlno - Dolní Bousov line, which is currently without a regular passenger service but AŽD says it has been equipped with modern technology.

AŽD says that the gradual introduction of autonomous technology will make it possible to increase efficiency and reduce rail’s operating costs. The manufacturers says it envisages full automation of specific operating procedures such as train movements in depots, and that it will be possible to deploy intelligent assistance systems to undertake the work of drivers.

“It is necessary to prepare for the possibility that the unavailability of skilled labour may significantly reduce the standard of regional transport services,” the manufacturer says.