DANISH infrastructure manager Banedanmark has announced that it will commission CBTC on two Copenhagen S-Bane lines on January 25, along with ETCS on a mainline on April 2 as part of its troubled signalling upgrade programme. 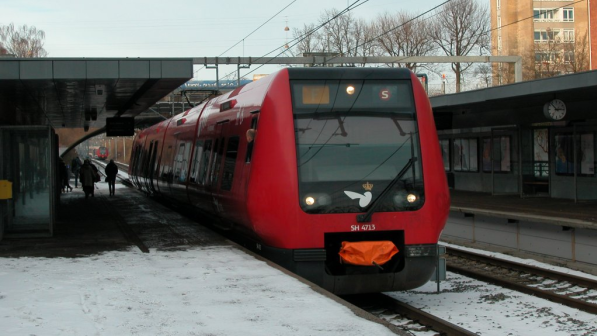 Siemens is rolling out CBTC across the Copenhagen S-Bane network under a €252m contract awarded in 2011.
Photo Credit: Kurt Rasmussen

Banedanmark will commission CBTC on the Copenhagen S-Bane Farum and Ring lines on January 25. As part of the changeover to CBTC, S-Bane services on the Ring Line and on most S-Bane lines north of Østerport will be cancelled on January 24.

For the first three months following commissioning, a provisional timetable will be in operation. Services on the Ring Line will operate at a frequency of six minutes, rather than five minutes under the full timetable. On the Farum Line, only half of all daytime weekday services will initially serve Skovbrynet and Dyssegård stations, compared with the full timetable.

CBTC has already been put into operation on sections of the city’s S-Bane network, between Hillerød and Jægersborg since 2016, and the Jægersborg - Klampenborg and Svanemøllen - Ryparken sections since 2019.

Following the commissioning of the two lines, approximately 43% of the S-Bane’s 170km network will be operating under CBTC. Work on the remaining sections is expected to be completed in 2022.

The work is being carried out by Siemens, under a €252m contract awarded in 2011. The project was originally set for completion in 2018 but was subsequently delayed due to technological issues and the approval process.

Banedanmark is also currently commissioning ETCS on the Langå - Struer - Holstebro main line, with a full rollout of the new signalling scheduled for April 2.

The work is being carried out in stages to minimise disruption to passengers. Additional measures are also in place to minimise transmission of Covid-19 among workers.

“In this way we can keep the traffic running and at the same time reduce the inconvenience to road users,” says Ms Thilde Restofte Pedersen, programme director at Banedanmark. “The remaining physical conversions to the new signalling system will be installed and tested on weekends, so that we do not impact the commuters who use the train on weekdays. Closure of level crossings is planned, so we are only working on a few level crossings at a time.”

Further information on temporary rail and road closures is available on the Banedanmark website.

The work follows the successful implementation of ETCS on the Lindholm - Frederikshavn line in northern Jutland and the Struer - Thisted line in Thy.

The rollout of ETCS across the Danish mainline network was approved in 2009, and was originally scheduled to be completed in 2023. This target was pushed back to 2030 by the government in November 2017, when it became clear that plans for the project were overambitious. Reasons cited included an overestimation of timescales to develop, test and stabilise the system, and an overambitious budget projection.

The project’s budget was originally set at DKr 24.9bn ($US 4bn) but was reduced to DKr 4.5bn in 2011-12 after Banedanmark received unexpectedly low contract offers. However, as the project as continued, subsequent budget revisions have returned to levels anticipated in the original business case.