IN light of serious difficulties with the installation onboard equipment, the Danish government has pushed back the completion date for the nationwide rollout of ERTMS from 2023 to 2030. 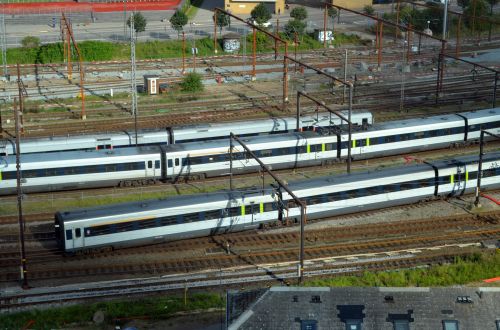 Alstom is responsible for equipping rolling stock, including 79 IC3 DMUs and 44 IR4 EMUs used by Danish State Railways (DSB) on inter-city services. Banedanmark chief engineer Mr Jens Holst Møller told delegates at the EU Agency for Railways’ Control Command and Railway Communication Conference in Valenciennes, France, on November 16 that less than a quarter of DSB’s inter-city fleet will be equipped with ETCS by the time the new Copenhagen - Køge - Ringsted line is due to open in December 2018. The new line is equipped exclusively with ETCS Level 2, but the line will now need to be equipped with a conventional Class B signalling system. The delays to the onboard programme have therefore pushed the opening of the new line back by six months.

From 2019, a service of five trains per hour will initially operate on the line using legacy signalling equipment. Electric services to Næstved will begin running via the new line and Køge in late 2020.

According to a draft timeline for onboard deployment shown by Møller at the conference, 20 IC3 and 13 IR4 sets will be equipped with ETCS by December 2018 and the two fleets will not be fully-equipped until December 2019. This raises questions over the viability of equipping fleets that are nearing life-expiry and due for replacement from 2022 onwards.

Møller said the onboard programme has been hampered by a longer-than-anticipated design phase, issues with train documentation, and software management issues. “ERTMS is not plug-and-pay technology and requires a lot of work from the integrator’s side - and as infrastructure manager, we are the integrator,” Møller explains. “Also, the onboard product is not complete in terms of software management.”

Banedanmark ERTMS project director Mr Jan Schneider-Tilli confirmed on November 17 that Alstom will continue to work on the onboard programme, which is now some three years behind schedule.

This delay has led to a reappraisal of the entire project, and the Ministry of Transport and Housing commissioned Deloitte to carry out an external review of the Signalling Programme.

Banedanmark has adopted a new plan which adjusts the ETCS lineside programme to correspond with availability of equipped trains. As a result, the soon-to-be-ordered electric locomotives, which will operate with push-pull sets of double-deck coaches, and new regional and inter-city electric trains will operate services on the lines equipped with ERTMS, including the Copenhagen - Køge - Ringsted line.

In Jutland, the upgrade of the Hobro - Aalborg line will be carried out as planned using existing signalling infrastructure. The transition zone located north of Aalborg will be moved to Lindholm, allowing construction of the new Airport branch by 2020.

Electrification from Fredericia to Aarhus and Aalborg using the new electric trains is now planned for 2024, coinciding with the commissioning of ERTMS.

In contrast with the IC3s and IR4s, the installation of onboard equipment on the Siemens Desiro DMUs used by DSB and Arriva’s fleet of Alstom Lint DMUs will be relatively straightforward. Under the draft timeline for onboard equipment, all 43 Lint 41 DMUs used by Arriva on regional services in Jutland will be equipped with ETCS by August 2019. DSB’s fleet of 20 class MQ Desiros will be equipped between January 2018 and March 2019.