DB CARGO has launched an international project to equip 1200 of its locomotives with ETCS by 2026, with the aid of grants from the European Union (EU). 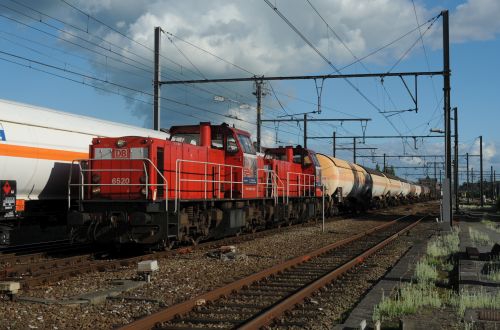 The EU will provide €9.816m towards the cost of equipping 65 class 186 Traxx electric locomotives, which are used on international services on the Rhine-Alpine, North Sea-Baltic, Atlantic and North Sea-Mediterranean Core Network Corridors across Germany, Belgium and France. The EU grant will support both the prototype installation and series retrofitting of the fleet.

By fitting the class 186s with ETCS, DB Cargo hopes to remove functional bottlenecks at borders and improve the efficiency of international operations. Installation will begin this month, and the programme will be completed by December 2022.

DB Cargo also plans to equip 57 multisystem class 185.1 Traxx locomotives with ETCS for operation on the Rhine-Alpine Corridor. The EU will contribute €5.766m towards the retrofit programme, which will be implemented between January 2019 and December 2023.

In the Netherlands, DB Cargo plans to fit all 48 of its class 6400 diesels with ETCS Level 2 Baseline 3.4.0. These locomotives are used on the Rhine-Alpine, North Sea-Baltic and North Sea Mediterranean Core Network Corridors. The EU will contribute €6.066m towards the cost of equipment and installation, including development, testing, subsystem verification and authorisation to place in service (APS) of two prototype locomotives, followed by the series retrofit.

In a separate development, the Dutch Ministry of Infrastructure has applied for European funding for ETCS onboard units for 300 freight locomotives which operate on the Rhine-Alpine corridor. These locomotives have all been equipped with ETCS Level 1 or Level 2 (version 2.3.0.D) already, but need to be upgraded and reauthorised. This will be implemented in close cooperation with the Dutch ERTMS national deployment programme, the Rhine-Alpine Rail Freight Corridor Organisation and the European Union Agency for Railways.

While grants normally cover 50% of investment costs, the EU will only contribute 45% or €32.461m towards this programme, which will be completed by the end of 2023.

Sweden will receive €13.709m in EU support for the upgrading and retrofitting 420 locomotives belonging to nine owners. Some are already fitted with ETCS level 2, but require an upgrade.

In Italy, Mercitalia will receive €6.15m from the EU to equip 61 multisystem class E405 and E412 locomotives with ERTMS Level 2 Baseline 3. Implementation will take place between March 2018 and June 2023.