A report has warned the sector must do more to prepare for the introduction of the new signalling system. 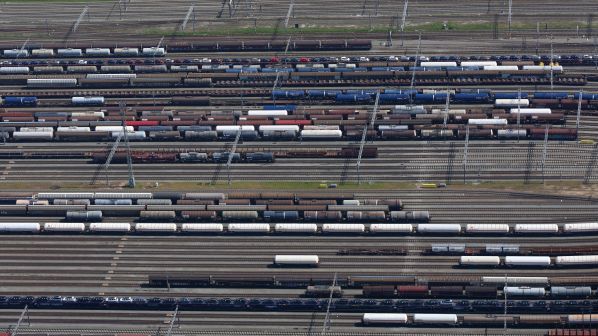 The installation of ERTMS on the Kijfhoek - Belgian border section is due completed between 2026-2028.
Photo Credit: Shutterstck/Aerovista Luchtfotografie

THE Dutch secretary general for the Ministry of Infrastructure and Water Management, Mr Jan Hendrik Dronkers, has warned that the introduction of ERTMS is expected to reduce Dutch rail freight traffic by 23% from the predicted target of 62.6 million tonnes if measures are not taken to properly prepare for the introduction of the new signalling system.

However, in the 16th ERTMS rollout progress report released on May 4, Dronkers said that the sector was making progress after being warned in June 2020 of insufficient ERTMS-equipped freight locomotives being available before the Kijfhoek - Belgian border section is completed between 2026-2028.

“Since then, the freight sector has worked closely with the ERTMS Programme Management Board to identify this risk and to come up with solutions,” Dronkers says. “I am very grateful to the sector for their efforts. The programme direction indicates that the risk of insufficient ERTMS equipped freight locomotives has developed positively.”

A report accompanying the progress update, Improvement Initiatives for Rail Freight, says about 18% of the 23% decline is the result of the Netherlands not permitting shunting without train protection and shunting with ERTMS is not yet possible.

“It is good that the impact is now quantified and it is essential that this dilemma is now resolved,” Dronkers says. “Fortunately, there are solutions available for shunting with and without ERTMS, for example by modifications to the track or by the deployment of auxiliary equipment, which will be used to control this risk.”

The study also found that the installation of ERTMS increases the material and operational costs of freight transport by 8% on average, which is not compensated in the existing ERTMS subsidy scheme.

While this cost increase can be absorbed by the market for international long-distance traffic, Dronkers says these additional costs cannot simply be passed on to the customer on shorter national distances. The study shows that this cost increase compared with other modes such as road and water would result in a decrease of more than 5% of the growth objective of 62.6 million tonnes in 2030, particularly in multi-modal transport due to its flexible pricing.

Eliminating this effect would be costly, while halving it is estimated to cost around €180m. State aid rules could also limit possible interventions.

The first contracts with ERTMS suppliers to equip almost 150 freight locomotives were concluded in early 2021. Europe and the Netherlands are jointly subsidising 90% of the costs of the prototype and 50% of the series conversion.

Alstom’s acquisition of Bombardier Transportation was impacting the rollout, Dronkers says, as the French manufacturer was opting to only install its own ETCS system.

“As a result, the conversion of about 90% of these freight locomotives is delayed,” Dronkers says. “It is expected that the rolling stock will be ready in time for the Kijfhoek - Belgian border line to open, but this could result in the loss of European subsidies. As a result, I have sent a letter to the European Commission requesting an extension of the subsidy period.”

“In addition, a request for a European CEF subsidy for the conversion of some 370 other freight locomotives was also submitted in early 2022. It remains to be seen whether this subsidy will actually be granted.”