IRJ at UIC ERTMS world conference Brussels. The path towards an interoperable version of ETCS Level 3 suitable for use in Europe still appears to be some way off. 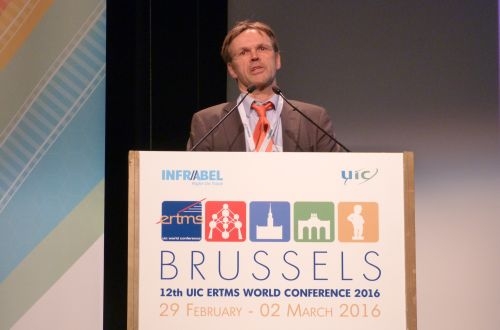 Dr Rüdiger Brandt, vice-president sales mainline with Siemens, says a pre-project for Shift2Rail for ETCS Level 3 will be completed this year with a view to it being accepted as one of the main projects within the IP2 element of Shift2Rail.

Brandt claims that specifications for Level 3 have not been detailed or agreed yet. But this assertion was challenged by Mr Pio Guido from the European Railway Agency, who said Level 3 was defined in the original specifications for ETCS. "Level 3, moving or fixed virtual block, is a reality in operation in metros and in specialised freight lines, mostly in "integrated" railways, where ETCS is not a requirement," Guido told IRJ. "Level 3 remains elusive on the main lines in Europe with mixed traffic and multiple actors, which is exactly the target domain for ETCS."

Referring to the visit to the Trafikverket-Bombardier demonstration of ETCS Regional in Sweden by delegates attending the 2012 UIC ERTMS world conference, Brandt said that this was not Level 3 as important elements were missing, with train integrity being done by the driver for example. "There have been more than 70 change requests for this system and not all of them have been completed, so there is a lot of work still to be done."

Brandt acknowledged that there is increasing demand for Level 3 to address capacity constraints and because of high expectations for infrastructure savings. It is will be a basis for higher levels of train automation in the future to bridge the gap between CBTC and ETCS. Level 3 will facilitate the introduction of moving block, automatic train operation, autonomous driving, automatic train regulation, IP radio, and satellite positioning.

Brandt envisages two major design variants for Level 3: as an overlay for Level 3 equipped trains on lines with ETCS Levels 1 and 2 to provide high capacity and availability and a pure Level 3 application on a line to reduce infrastructure costs, as Level 3 will require less trackside equipment, with simplified interlocking functions, and better track utilisation.

But Brandt recognises there needs to be a consensus on operating rules which he believes will be a key for success, while interoperability will become an even bigger challenge. "The challenges are on the operational side rather than on the technical side," Brandt told IRJ. "ERA has advised the industry and railways in Europe to work out a common set of operational scenarios first in order to derive and hand in the required change requests. Change requests on interfaces and functions will follow after these rules are set." Brandt says the big lesson from developing ETCS is that if you do it the other way round, interoperability is difficult to achieve. "That is the reason why it took several baselines before an interoperable specification was reached," Brandt explains.

"I see no real technical barriers to the introduction of Level 3 as devices and systems for train integrity are in use outside the EU, and Shift2Rail can bring additional effective solutions," Guido says. "Level 3 is a priority for ERA, and we have started meeting interested railways to define how best we can work together to enable railways exploit this opportunity with ETCS. The railway sector and ERA consider Level 3 as one of the game changers to ensure a more competitive and efficient railway system."

This story was updated on March 14.