ERTMS trials to start in Norway next month 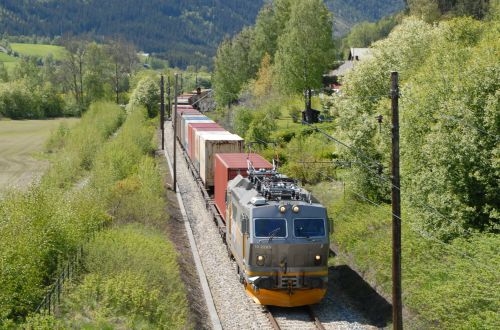 Two trains will be used to carry out the tests - a Robel track machine and a locomotive - on the 20km Iske - Rakkestad section of the 80km single-track Ski - Sarpsburg line. Bombardier was appointed to conduct the pilot project, and it will carry out onboard tests as well as supply lineside equipment.

Mr Kjell Holter, Jernbaneverket's technical advisor for the ERTMS project, told IRJ at Nordic Rail 2013 the aim is to extend the pilot to the entire 80km line and begin commercial operations in December 2015. He said that the trial is being carried out using Baseline 2.3.0d, with a view to rolling out Baseline 3 on the rest of the Norwegian network in a national rollout programme that will take place in various stages up to 2030.

He says the 80km line offers a number of challenges to the system, including its 14 level crossings and the presence of just two passing loops at the line's seven stations, and the pilot project will test operating in these conditions.

"This is not a project to see whether ERTMS will work in Norway, we know it will do that, but to adapt the system to our specific operating conditions and to enable our engineers and drivers to learn and get used to using this new technology," Holter says.

ERTMS will be used to prompt actions at these level crossings by providing information on the speed and location of the train and Holter says this is an important element of the trial to adapt ERTMS to the infrastructure manager's needs. The ERTMS Level 2 solution will use fixed block signalling and will include axle counters. While Holter says Jernbaneverket is playing it safe by installing ERTMS Level 2, with a nod to Sweden's ERTMS Level 3 project, he says the system is designed with future upgrades in mind. He also praised the environmental benefits of the new system.

"By upgrading our existing STM 700 signalling system we do not need to put down 1500km of cables that we would have if we had retained this system," Holter says. "ERTMS also provides significant energy cost savings."

The next phase of Jernbaneverket's ERTMS programme encompasses the line from Steinkjer to Bodø, the Norwegian section of the Narvik - Kiruna, Sweden, line and the Roa/Hokksund - Bergen line with the aim of completing this phase by 2020.

Bombardier might have secured the pilot project, but for Holter this does not mean that it is in pole position to secure subsequent contracts, and he encouraged other suppliers to consider working in Norway.

"We want to hold an open competition in order to keep the cost down," Holter says. "We are not the first to carry out this project, which means that a lot of expertise and experience has been built up elsewhere. We want to use this expertise and bring it to Norway."