TESTS of on-board functionality of ETCS Baseline 3, conducted on an operational line fitted with Baseline 2 ETCS in Switzerland during the second half of April, have successfully demonstrated the backward compatibility of the two versions of software, says Siemens. 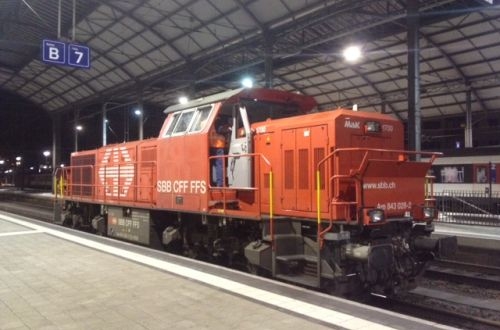 The SBB diesel locomotive used for the Baseline 3 tests.

The trials were conducted by Siemens, Swiss Federal Railways (SBB) and BLS using a locomotive fitted with an ETCS Level 2 on-board unit to which Baseline 3 was uploaded.

The tests were performed according to a test programme prepared by the two railways and were aimed at demonstrating three things:

the maturity and stability of Baseline 3.

Siemens is executing several wayside and on-board ETCS projects in Switzerland as part of the migration of the entire SBB network to ETCS by 2017, so all three parties were keen to test an ETCS Baseline 3 on-board unit.

A new Technical Specification of Interoperability for Control Command and Signalling (TSI CCS) will become legally binding in the European Union later this year. The new TSI is based on ETCS Baseline 3. It will also pave the way for the introduction of ETCS Level 1 LS, which will be deployed in Switzerland and on EU rail corridors.