The ETCS system covers the transition between the Danish and Swedish signalling systems. 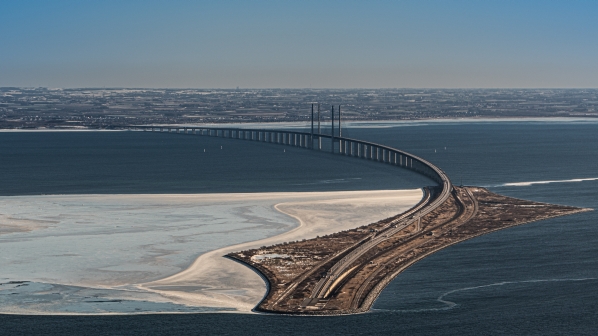 THE use of ERTMS onboard equipment for cross-border operation across the Øresund fixed link between Sweden and Denmark has been validated following testing with an ETCS-equipped Siemens Vectron locomotive and a train equipped with conventional signalling systems..

The link is equipped with the Danish ZUB 123 train control system and the Swedish ATC-2 system, with ETCS Level 2 available for the signalling transition zone on the Peberholm artificial island.

The ETCS-equipped locomotive carried a Trainguard 200 onboard unit operating at Unisig Baseline 3 specifications, together with Specific Transmission Modules to communicate with each of the legacy systems. Testing on the bridge was organised by the Øresundsbro Consortium, which manages the link, in cooperation with Siemens and infrastructure managers Trafikverket and Banedanmark.

Øresundsbro Consortium project manager, Ms Katarina Reychman, told IRJ that five test cases were undertaken to validate the system. The tests were delayed by unrelated events, but Reychman says these were overcome with some “creative thinking,” allowing the system to be approved and enter service by 04.00.

Reychman says there was extensive testing of the system in both a lab and on the Båstad - Laholm line in Sweden before it was implemented on the link. The project required the installation of 16 pairs of ETCS balises and some additional ZUB 123 equipment. The largest challenge was compiling the documentation for the safety certification, Reychman says, with the addition of ZUB 123 requiring the completion of a more comprehensive safety case.

Reychman says the project was heavily affected by the Covid-19 pandemic. The verification runs were due to be completed on April 24 2020, but this was postponed due to key staff members becoming sick, meaning they were not allowed to come to work.

“Not being able to meet even once in real life when new people were introduced into the project was a challenge to the project collaboration, but thanks to project members being very professional, it still worked out,” Reychman says. “We also had to make some fairly large changes in the plans for the verification night, try to make sure we did not overcrowd any spaces, cut back on staff to make sure only the people that were absolutely essential were on the trains and by the transition zone on Peberholm.

The line will continue to support the use of all three signalling systems until ETCS is installed on the Danish and Swedish sides of the link, with the implementation on the line from Denmark to Peberholm now underway.