First application of ATO over ETCS underway in Mexico

IRJ at the UIC ERTMS world conference Brussels. The application of automatic train operation (ATO) in conjunction with ETCS Level 2 is being pioneered on a new line project in Mexico, well ahead of its adoption in Europe. 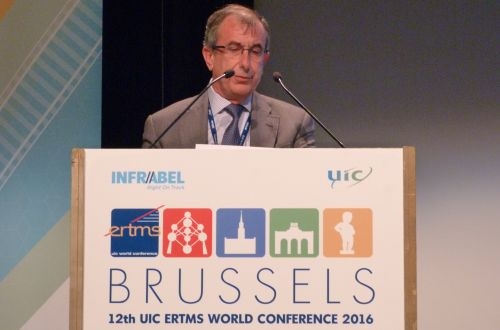 "The proposed architecture for ATO over ETCS has been developed by Unisig and the ERTMS Users Group," Mr Manuel Villalba with CAF Signalling, told delegates. Although the two systems are functionally different, the on-board systems are shared. The same track-to-train communications system is used with independent channels connecting the cab radio via an IP network to the separate trackside ATO and ETCS radio block centre and interlocking.

"The ATO over ETCS concept is entering the final steps of the road map, and the ATO specifications require further technical work under Shift2Rail, but we are already applying the concept using draft specifications on the new 57.7km Mexico City - Toluca line," Villalba said.

The contract was awarded in 2014 and work on the project began last year. CAF Signalling is responsible for the on-board ATO and ERTMS, the trackside ATO, and the integrated control centre, while Thales is supplying the trackside ERTMS equipment and the interlocking. CAF is building a fleet of 30 five-car Civia EMUs for the new line.

The ETCS specification is for Level 2 Baseline 2.3.0d with semi-automatic train operation to the GoA-2 grade of automation which means drivers will be required to close the doors and operate the train during periods of disruption. Trains will operate at 2.5-minute headways at a maximum speed of 160km/h.

The line will be electrified at 25kV ac and will run from Observatorio, at the southwestern end of metro Line 1 in Mexico City, to Toluca with five stations. Trains will complete the journey in 39 minutes, which will be about 90 minutes faster than by road, and the service is expected to carry around 270,000 passengers per day when it opens in 2018.

Mr Michel Ruesen, director of the ERTMS Users' Group, explained why the ATO over ETCS concept is still under development in Europe: "We want to ensure the concept can be applied to the whole network and not just one specific line."