First commercial use of ATO over ETCS in London

GOVIA Thameslink Railway (GTR), in cooperation with Britain’s infrastructure manager Network Rail (NR) and Siemens, is claiming a world first by running the first train in passenger service on the central-London section of Thameslink using ATO over ETCS. 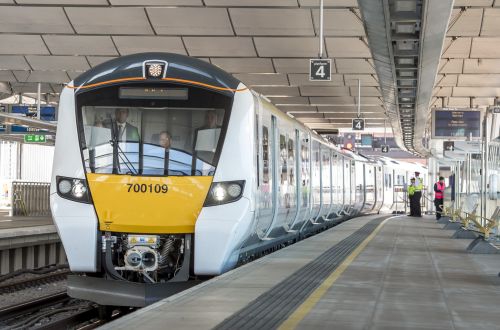 A Siemens Thameslink train at the rebuilt London Blackfriars station.

On March 17, a southbound Thameslink train transitioned into ETCS Level 2 Full Supervision and ATO at Kentish Town and then brought itself to a halt automatically at London St Pancras. The driver then closed the doors and selected ATO again so that the train could continue to operate automatically through Farringdon, City Thameslink, and London Blackfriars stations before switching back to manual driving south of Blackfriars.

GTR says it has run nearly 200 night and day shifts of testing since April 2016 when it began proving ETCS dynamically at NR’s ETCS National Integration Facility at Hertford North. GTR also had to demonstrate to Britain’s regulator, ORR, that it has made the necessary amendments to its health and safety management system to allow the trains to operate in both ETCS and ATO in passenger service.

ATO is necessary on the St Pancras - Blackfriars section of the Thameslink network to allow 24 trains/hour/direction to operate in peak periods from December 2019. GTR will start to operate 22 trains/hour on this section in May when the network is extended to Peterborough and Cambridge northeast of London and Horsham, Maidstone East, Dartford, East Grinstead and Littlehampton south of London.

Until now, Thameslink has only operated between Bedford, London, Wimbledon and Brighton. Thameslink is operated by a fleet of Siemens class 700 Desiro City trains equipped with ATO, ETCS and conventional signalling.

“Seeing the first UK mainline train running in ATO for passenger services is a truly momentous day for the Thameslink Programme High Capacity Infrastructure Team, and the wider industry teams that have been involved,” says Mr Martin Chatfield, NR’s project director for high capacity infrastructure. “This underlines the combined efforts of NR, the supply chain, and the train operators over the past five years to reach this point. It not only proves the digital railway technology within the heavy rail environment, but it also demonstrates that an industry approach is the way to solving railway capacity issues in the future.”

“The introduction of this technology, which was developed and delivered in Britain, maintains Britain’s position as a world leader in the application of technological solutions to the train control infrastructure, something that as an industry we aim to build on and further deploy,” says Mr Mark Ferrer, operations director digital rail, with Siemens.