The ETCS system was installed on a class 362 WTB locomotive. 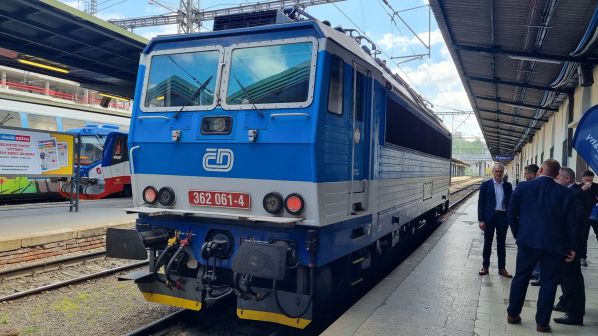 A consortium led by ČD Telematics and AŽD Praha have handed over to Czech Railways (ČD) the first locomotive in the Czech Republic retrofitted with ETCS, which has received certification to enter commercial operation.

The class 362 WTB locomotive was handed over to ČD CEO and chairman, Mr Michal Krapince, by ČD Telematics board member and director of the telecommunication and infrastructure services department, Mr Tomáš Businský, at a ceremony attended by minister of transport, Mr Martin Kupka.

ČD Telematics and AŽD Praha signed a framework contract with ČD in 2019 to equip up to 131 electric locomotives with ETCS. The agreement included a firm contract worth Koruna 1.4bn ($US 59.6m) to equip 102 class 162, 162 WTB, 362 and 362 WTB locomotives with ETCS. Alstom Belgium and ČMŽO - Elektronika were also involved in the supply and installation of ETCS on the vehicle.

The successful retrofit on the prototype vehicle will now simplify the process to certify the remaining 362 WTB locomotives for commercial operation.

The Czech Republic plans to mandate the use of ETCS on certain main lines from January 1 2025.

“We have already equipped several hundred kilometres of our lines with this unified technology and we are moving forward so that we can start exclusive operation of ETCS on corridors in 2025,” Kupka says. “We are aware of the financial complexity of the ETCS implementation and therefore we intend to continue to use financial assistance from the European Union in addition to national resources, which will enable us to better manage the implementation of the system.”

“At present, we have contractually secured the delivery of ETCS on more than 400 current vehicles and we have also concluded contracts and ordered 246 completely new vehicles that will be delivered from the factory with ETCS,” Krapince says. “We have also started training hundreds of drivers and in the second half of this year we will start operating the first trains under ETCS supervision. We are thus taking all the steps to ensure that we will be able to smoothly switch to exclusive operation under ETCS supervision on selected corridors on January 1 2025.”

“This year alone, we expect more than 400 ETCS-equipped vehicles to pass the approval process,” says director of the Operational and Technical Section of the Railway Office, Mr Radek Šafránek. “The main objective we are pursuing together with the European Railway Agency is to increase safety on the railways. That is why we are striving for the introduction of compulsory training for drivers on simulators, which will also be included in the National ERTMS Implementation Plan.” In April, ČD awarded ČD Telematika a contract to install ETCS on seven Alstom Class 380 Pendolino EMUs at a cost of around €2.42m per vehicle. CityElephant This was followed at the start of May by a contract with ČD Telematika, working in cooperation with Alstom, Škoda Transportation, and AŽD Praha, to equip ETCS on 66 class 471/971 ČD CityElefant EMUs, at a cost of around €930,000 per vehicle. The class 471 CityElefants carry around 20% of all Czech rail passengers.