All trains between Olomouc and Uničov will operate under ETCS from January. 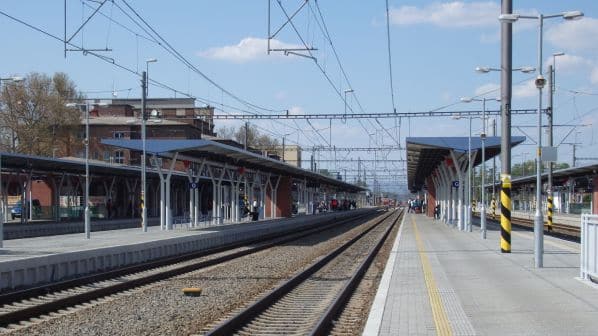 ETCS will control all train movements from Olomouc (above) to Uničov.
Photo Credit: SŽ

CZECH infrastructure manager SŽ has completed an upgrade of the line from Olomouc to Uničov, including the installation of ETCS which from next month will control all train movements on this busy regional route.

SŽ says that the Olomouc - Uničov section of the route from Olomouc to Šumperk is the first line in the Czech Republic where all train movements will be controlled by ETCS, requiring all rolling stock operating on the line to be fitted with the European train control system.

Equipping the route marks an important milestone in the national ETCS rollout programme, SŽ says, which will be the only signalling system on significant parts of the Czech network from 2025.

The infrastructure upgrade between Olomouc and Uničov was completed in time for passenger services to return with the timetable change on December 11. It has included electrification at 3kV dc with provision for conversion to 25kV 50Hz ac in the future.

The maximum speed has been increased to 160 km/h, cutting journey times from 40 minutes to under 30 minutes, while stations have been refurbished and accessibility improved.

A new passenger information system has been installed and the station buildings at Bohuňovice and Šternberk have been rebuilt.

The line from Uničov to Libina has also been electrified and upgraded to increase the maximum speed to 100km/h. A new station has been built at Troubelice střed that is closer to the centre of Troubelice, while the station building at Libina has been refurbished.

Work between Libina and Šumperk has included the removal of temporary speed restrictions and upgrading nine level crossings.

SŽ has now installed ETCS on 754km of the Czech network, with the new system due to go live next year on lines including Přerov - Brodek u Přerova, Ejpovice - Pilsen and Dětmarovice - Mosty u Jablunkova.

Installation on a further 3300km, including secondary tracks, is now in preparation. ETCS is mandatory for any line where the maximum speed will be raised above 160km/h, and will also be installed on the Czech Republic’s planned high-speed network.

On lines with lower levels of traffic, SŽ is rolling ETCS Level 1 with limited supervision and lineside signalling. What SŽ refers to as ETCS Stop has been installed on the Březnice - Blatná - Strakonice, Nepomuk - Blatná and Frýdlant nad Ostravicí-- Ostravice routes.

“From 2025, the exclusive operation of ETCS will be mandatory for significant parts of our network,” says SŽ director general, Mr Jiří Svoboda.

“The launch of this system on the line from Olomouc to Uničov is an important step, because here we can test operation with the operators and thus avoid complications that may be associated with the introduction of exclusive operation of the European safety system.”