BRITAIN's infrastructure manager Network Rail (NR) has issued a request to participate in a tender worth between £35m and £55m for the design, supply, delivery, commissioning and support and maintenance of an integrated ETCS Level 2 and traffic management system (TMS). 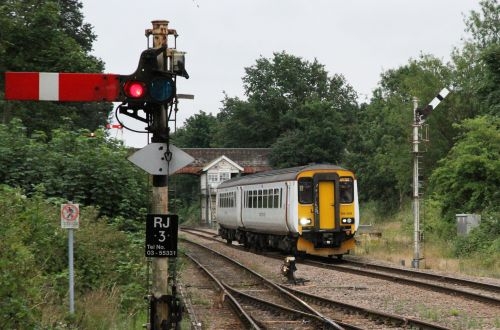 A number of Abellio Greater Anglia DMUs will be retrofitted with ETCS.
Photo Credit: Keith Fender

NR intends to deliver, via an early design and build deployment on the Norwich – Yarmouth/Lowestoft lines, a digital railway toolkit which will become the standard building blocks for the future national roll-out of ETCS. The TMS will have provision to interface with a connected-driver advisory system (C-DAS). NR requires an open protocol development to communicate with associated systems culminating in an integrated digital railway toolkit.

The tender will be divided into three lots from which bidders can choose: ETCS, TMS, or both systems together. Maintenance and support will be required for both ETCS and TMS for 10 years, with an option to extend it for a further five years.

The project covers 99km of track, and retrofitting five class 153, nine class 156, and 12 class 170 DMUs, 47 locomotives, a class 37 locomotive-hauled train, and a class 66 hauled ballast train. The project will entail the closure of eight signalboxes, and several level crossings.

Bidders will be invited to a briefing on the tender during the last week of March.

Work on the project is expected to start in January 2017, with the development of ETCS Baseline 3.5.0 completed and available for deployment by December 2017. The TMS training system should be ready by June 2018, with the commissioning of both systems envisaged by the end of December 2018.

Mr Paul Boyle from Virgin Trains East Coast and Ms Laura Doughty from NR (pictured below) told delegates at the UIC ERTMS conference in Brussels on March 1 that the objective is to install ETCS Level 2 without lineside signals on a short initial section of the London - Leeds/Edinburgh East Coast Main Line between London King's Cross and Wood Green in north London by March 2020, followed by Wood Green - Peterborough (including branches to Hertford North, Royston and Ely) by August 2022, and Peterborough - Retford by December 2024. These sections cover 338km or 1546 track-km, 2024 signal equivalent units, 32 interlockings, 56 highway level crossings, and 68 non-highway crossings.