THE project to automate Paris Metro Line 1 reached an important milestone on July 7 with the launch of full Unattended Train Operation (UTO) at weekends. 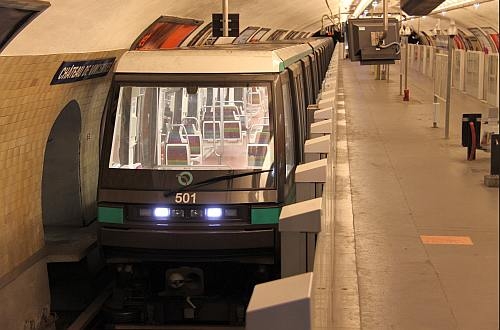 Paris Transport Authority (RATP) has been operating Line 1 in mixed mode with both UTO and semi-automatic train operation (STO) since last November, and the number of UTO-equipped trains in service has increased steadily in the first half of this year. RATP says more than 60% of services are now driverless, and on May 21 full UTO operation was introduced after 21.00 on weekdays. The transition to UTO will be completed at the end of the year.

New driverless MP05 trains from Alstom are entering service at a rate of two per month, and 28 of the 55 trains ordered by RATP are now in service. The fleet is gradually replacing the MP89 sets, 27 of which remain in operation on Line 1. These trains are gradually being cascaded to lines 4 and 11 as more MP05s are commissioned.

Line 1 is the oldest and busiest metro line in Paris, carrying around 750,000 passengers per day. Siemens was awarded a €30.8m contract in 2005 to upgrade the PA BF speed-code automatic train control system to CBTC using its Trainguard MT technology and Airlink free-propagation radio communication system. Siemens also provided onboard equipment and the new control centre, which was commissioned in May 2010. The existing relay-based interlockings were replaced with Thales LockTrac modular computer-based interlockings.

The introduction of CBTC has means headways will be reduced from 105 seconds to 85 seconds. Together with the introduction of new trains, this will boost capacity from 24,000 passengers per hour per direction in 2008 to 30,000 by the end of this year.