THE first major contract for the €3.7bn western extension of Paris RER Line E was awarded on February 10, when French National Railways (SNCF) president Mr Guillaume Pepy and Siemens president Mr Joe Kaeser signed a €186m contract for the rollout of CBTC on the core section of the east-west line. 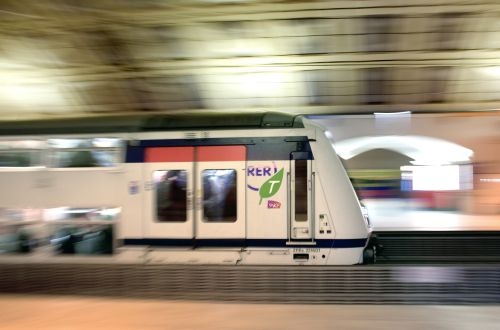 The system, which has been dubbed Nexteo by SNCF, will be installed on the existing Rosa Parks - Hausmann-Saint Lazare section and the 8km underground extension to La Défense and Nanterre-la-Folie, which is due to open in 2020.

Ridership on Line E is expected to increase from 370,000 (including Poissy - Mantes-la-Jolie Line J services, which will be merged into Line E) to 620,000 with the completion of the western extension from Nanterre-la-Folie to Mantes-la-Jolie in 2022.

This means the core Nanterre-la-Folie - Rosa Parks section will need to accommodate up to 22 trains per hour per direction, although Nexteo will provide capacity for up to 28 trains with theoretical headways of 108 seconds, compared with 180 seconds at present.

The 20km core section includes maximum gradients of 3% with trains operating at up to 120km/h. Each 240m-long 10-car train accommodates up to 2500 passengers and more than 65,000 passengers per direction per hour pass through the busiest stations at peak times. SNCF plans semi-automatic operation under CBTC Grade of Automation 2 (GoA2) with automated starting and stopping and driver-controlled doors.

Siemens France will supply its Vicos operational control system and Airlink radio communication for the project, which is the first implementation of CBTC on the French national network. The deployment will be supported by Paris Transport Authority (RATP) which has already implemented CBTC on Paris metro lines 1, 3, 5, 9, and 14.