Siemens ETCS on test in Sweden

SIEMENS announced on December 6 that it successfully conducted driving tests with its Trainguard 200 ETCS equipment in Sweden over a two-week period in November. 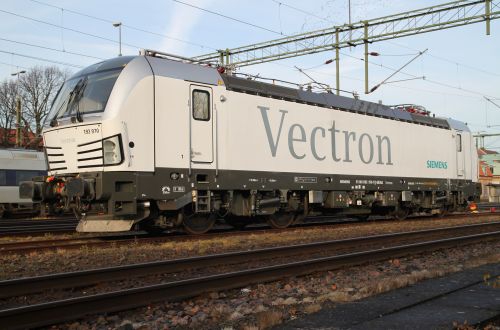 The test results mean that ERTMS is now validated in Scandinavia, making the railway a more competitive alternative for cross-border passenger and freight transport between Sweden and Denmark.

The tests were conducted using a Siemens Vectron locomotive on the Gothenburg - Lund West Coast Railway in the southwest of Sweden at speeds of up to 200km/h. The locomotive operated on a wayside installation, similar to that which will be used on the Öresund Bridge between Sweden and Denmark, and representatives from the Swedish Transport Agency Trafikverket, Danish infrastructure manager Banedenmark and Siemens were on board.

The train was operated by Hector Rail, and the locomotive was fitted with Trainguard 200 On Board Unit (OBU) according to Unisig Baseline 3 as well as a Swedish and a Danish national train protection system.

Siemens says demonstrating compatibly with Swedish ATC2 and Danish ATC (ZUB 123) is a key step towards the introduction of ERTMS in the two countries.