THALES Canada has reacted strongly to claims by Edmonton's mayor Mr Don Iverson's that it has not delivered a "working product" for the city's new Metro Line light rail line, which began restricted operations on September 6. 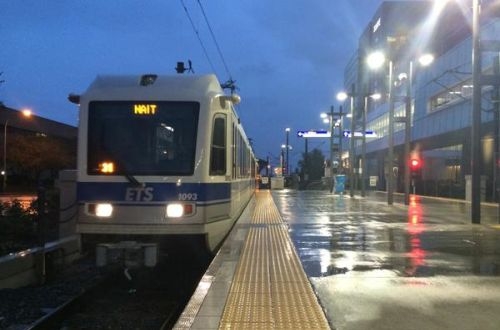 Iverson expressed frustration during an interview with Global News on September 7 at Thales' apparent failings. Operations on the new 3.3km line between MacEwan and North Alberta Institute of Technology (Nait) are currently restricted to a maximum of 25km/h with drivers using line-of-sight operation.

"Until the signalling contractor delivers a working product, allows us to run this thing at speed, and sort out all of the bugs with the signal crossings at the intersection, I'm not celebrating. There's nothing to celebrate," Iverson said.

In a statement released by Thales Canada communications manager Ms Emmanuelle Bleytou on September 9, the contractor countered these claims, stating that it was "very disappointed by the mayor's remarks."

"Thales has delivered a working product, neither Thales nor the system is preventing the operation from running at speed, and the Thales system has introduced no bugs or errors in the operation of the signal crossings at intersections," the statement said. "The signal intersections are working per the city's engineering design, and we encourage the mayor to discuss the improvements he seeks with his traffic department."

Thales added that its system is working perfectly as designed, and delivered. "[It] is enforcing the speed limits imposed by the city, ensuring the train operators do not exceed the authorised imposed speed. It will continue to do this correctly once the city decides to remove its imposed speed restriction. We look forward to the city taking this positive step in the near future."
In response, Iverson said he was "fairly well-informed about what's happening with the Metro Line."

"The fact of the matter is there was a significant bug yesterday in the system that affected and disrupted the entire LRT system, not just the Metro Line," Iverson said. "It was a software problem. So there are still issues with the software. I will concede that we are using some of their software in order to run the system in its reduced capacity. But the fact that we're having to run it in its reduced capacity is because they have not yet delivered on the full suite of software or hardware upgrades to the LRVs that we were promised 18 months ago."

Trains are currently running at 15-minute intervals between Churchill station and Nait stations, and while the city is holding trains at MacEwan to coordinate services and minimise wait times at intersections, there is still significant disruption to road traffic. Journey times on the new line are around 14 minutes, double the expected 7 minutes.

The city appointed an independent safety consultant to verify Thales' work in mid-August. However, it says that it could take up to six months for the company to identify the problems and mitigate them.