When you enter a station and take the train on a modern metro system, you are surrounded by visible signs and devices at every stage: staff, barriers, turnstiles, and platform screen doors. However, the underlying infrastructure is much more complicated than what can be seen. 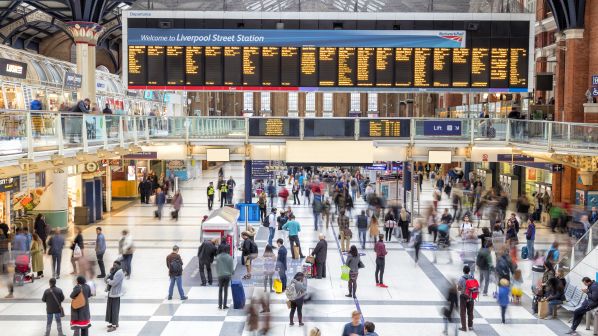 The entire system consists of multiple subsystems such as access control systems, ticketing systems, visual real-time tracking dashboards (of trains, depots, and stations), emergency communication systems, anti-theft alarms, and perimeter alarm systems. Together, they make the metro station a safe place for both passengers and staff.

Every part of this integrated security system is built with technologies that are continuously evolving and improving. For example, the bearer network needs to provide high bandwidth across long distances, support service upgrades at any time, offer high availability, and have total control over processes and nodes.

These requirements bring many challenges for the reliability and operation of bearer networks, which may increase the risk of information leakage of access devices, as well as the responsibility to manage new and ongoing maintenance issues.

Another issue is bandwidth. Displays and other HD terminals are densely distributed. Turnstiles, electronic signs, and emergency broadcast devices are operating all day, producing massive amounts of data. Therefore, the need to provide higher bandwidth while operating more efficiently is hard to achieve.

Maintaining network quality in traditional networks is not easy, with several environmental factors causing signal degradation, and ultimately a low return on investment. For example, the average distance between adjacent metro stations is around 2km, yet a wired network needs to be converged every 100m, which may cause signal attenuation. Also, steel trains may cause electromagnetic interference and increase the distortion of trackside images. In addition, more investment is required for the construction of equipment rooms, which occupy valuable space and reduce the overall operational efficiency of the metro system.

The transmission distance of all-optical industry networks is up to 40km, solving the issue of short transmission distance in traditional networks and reducing the network planning complexity in metro environments. All-optical networks are based on a point-to-multipoint architecture and can provide a large split ratio up to 1:128, which are well suited for the backhaul of massive information points. Even one aggregation OLT can handle thousands of HD terminals.

Most metro systems use the 10G PON technology to deploy networks which can be upgraded to 50G PON without re-cabling and facilitate the deployment of new HD terminal backhaul points or smart systems.

The all-optical solution uses fibers for intra-station communication. The link from the aggregation layer to Optical Network Unit (ONU)  consists of passive optical splitters and fibers that are immune to electromagnetic interference, reducing the fault rate and ensuring full-time, secure, and stable network operation.

Huawei's Network Management System supports plug-and-play ONUs, automatic service provisioning, visible batch configuration, and smart operation and maintenance (O&M) in a user-friendly interface. Technicians can deploy devices in minutes instead of hours. And if a fault occurs, maintenance personnel can quickly locate the fault and simply replace the faulty device.

There is a strong market for these smart urban rail applications. In China alone, the market space will increase from $US 4.16bn in 2020 to $US 12.42bn in 2026, according to China Urban Rail Transit Association.

In this new era of smart cities and digital transformation, smart metros equipped with new all-optical network will become an important building block in a city's modernisation efforts.