Autonomous rail freight transport at GoA4 to be tested in Finland

The system will use ATO over ETCS. 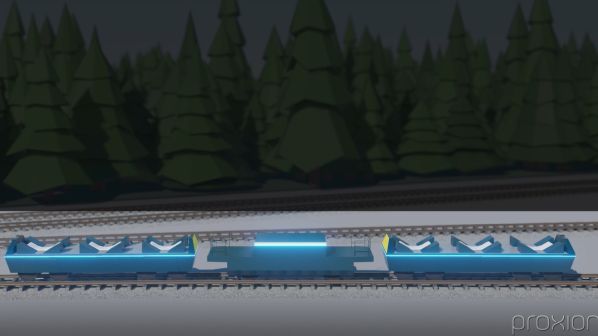 A Finnish project to develop autonomous industrial rail freight services using ATO over ETCS at GoA4 on short distances between factories or to ports is due to enter the development and verification phase following the allocation of funding.

The target of the project, led by Proxion in conjunction with around 20 organisations, is to develop a short distance transport concept based on autonomous train to reduce CO2-emissions and improve safety and economic competitiveness.

The project is being undertaken in close cooperation with the Finnish steel and forest industry, which largely relies on lorries for short-distance transport inside facilities.

Business Finland, Proxion, VTT, Steel Wheel and Electric Power Finland are funding the project. Proxion, which was founded in 2005, will coordinate the project and develop the information systems; VTT will produce the sensors and software required for obstacle and environment detection; Steel Wheel is responsible for fleet development; and Electric Power Finland is responsible for digitising the rail equipment.

The system will be designed for and tested on private lines that have a lower Safety integrity level (SIL) than public lines. The system will be based on ATO over ETCS, although it will only require subsets of the ETCS framework instead of the full architecture. The system will control a specially designed battery-powered train that will have a range of up to 20km at 20km/h. The train will be powered by two 100kW engines, hauling up to 300 tonnes in a fixed configuration.

A variety of sensors will be tested, including radar and thermal and RGB cameras, well as DGNSS, inertia and reference point positioning systems.

“It is important to ensure that the autonomous train operates reliably in all conditions and on a wide range of track connections,” says VTT principal scientist, Mr Pertti Peussa. “It is a leap towards safer railway transport. For example, sensor interpretation technology for the train unit is being developed as is combining a thermal camera and radar observations in order to be able to react correctly and in time to any obstacles or situations ahead.”

The autonomous train project was launched in August 2018, with the concept phase and preliminary studies completed in 2020. The research, development and simulation phases are due to take place between 2021 and 2022, during which the software and equipment will be tested, simulated and test-driven, before a pilot phase is launched in 2023.

“The development of railway automation and ecosystems is currently a national interest for several European countries,” says Ms Janne Hauta, Finnish Ministry of Transport and Communications ministerial advisor specialised in rail automation. “All transport will require AI-based data utilisation solutions that are also at the heart of the autonomous train project. The whole project represents a bold, innovative pilot that creates cost-effective, dynamic new services that support business needs.”

“The strict environmental targets set by the EU are in favour of developing the electric modes of transport, and railway transport is the most energy efficient way to transport goods by land,” says Mr Reijo Viinonen, the project manager of Proxion’s autonomous train initiative. “The innovative development of rail transport is therefore in key position, as the goals are to develop transport that is lower in emissions and to achieve better rail utilisation.”

An in-depth feature on the latest trends in railway signalling, including efforts to bring full automation to the mainline, ran in the March 2021 issue of IRJ on page 38.