Driver has rear view to detect obstacles and hazards when reversing train. 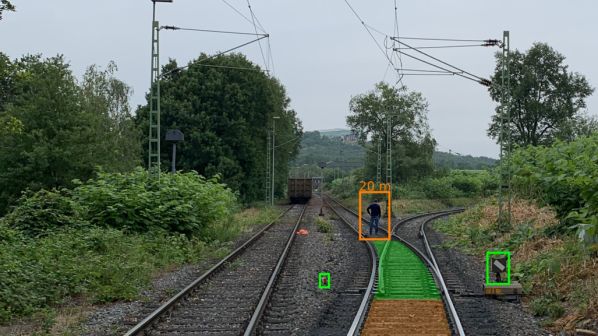 3D lidar sensors developed by Blickfeld of Germany have been supplied to an EU-funded research project aiming to improve the safety and efficiency of shunting freight trains.

The Shunting Assistant and Monitoring Interface for Autonomous Rail Applications (Samira) project is being undertaken by the University of Applied Sciences in Aachen (FH Aachen), in conjunction with the Automotive and Rail Innovation Centre (Aric) and rolling stock and component manufacturer Reuschling.

Lidar sensors installed on the rear of the train enable the driver in the cab to watch out for obstacles as the train reverses, replacing a member of staff keeping watch from the rear wagon and communicating with the driver by radio.

The system helps to avoid collisions and reduces risk to railway personnel, removing the need for a member of staff to ride on the rear wagon at night or in poor weather conditions.

Blickfeld has supplied its Cube 1 sensor with a field of view of 70° and the Cube Range 1 for detecting obstacles at a distance of up to 150m, providing clear rearward vision even when traversing curves.

The semiconductor-based sensing technology is highly robust, Blickfeld says, and is able to withstand the shock and vibration experienced during shunting operations.

Information is converted to a live feed delivered to the driver via a tablet computer and indicates whether there any obstacles in the monitored area behind the train.

“The potential for this technology to provide a dramatic increase in both efficiency and safety is significant,” says Mr Matthias Blumenschein, part of the Rail Vehicle Engineering Research Team at FH Aachen.

“We are pleased to have made great progress in researching shunting within the Samira project, which is now nearing completion.”

“In addition to the immediate benefits such as operational efficiency and personnel safety, the introduction of autonomous functions also has broader implications, such as promoting the smooth operation of an entire train and thus helping to make environmentally-friendly rail transport more attractive to the logistics industry,” says Mr Florian Petit, co-founder and chief experience officer at Blickfeld.