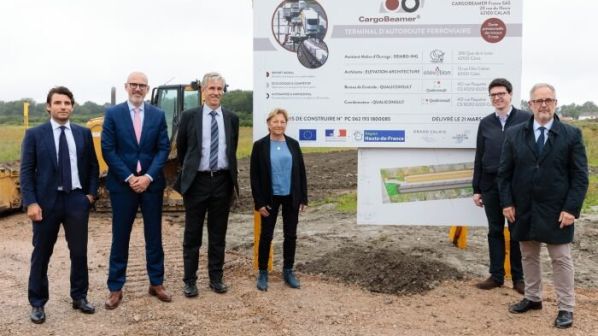 The new terminal will be used by CargoBeamer wagons carrying HGV semitrailers and will serve both the port of Calais and the Eurotunnel freight shuttle terminal, with the aim of capturing part of the logistics market to and from Britain after Brexit.

The terminal, which was originally announced in November 2014, will be constructed by an Eiffage-led consortium. The project will be funded primarily by CargoBeamer, as well as a €7m grant from the European Union‘s Connecting Europe Facility (CEF) and further funding from the French national and Hauts-de-France regional governments.

The terminal is due to open in 2021, serving trains operating to destinations in central Europe. It will feature two tracks with 18 double gate loading points either side of the railway, allowing an entire train of 36 semi-trailers to be loaded or offloaded in 20 minutes completely automatically once the HGV semi-trailers have been driven into place.

The CargoBeamer system differs from conventional methods of loading semi-trailers onto intermodal wagons in that it transports the semi-trailers on large steel pallets which can be pre-loaded without the train being present, and then driven on. Transshipment of the loaded pallets to the wagons is then undertaken using automated transshipment equipment located at purpose-built terminals such as the one in Calais to slide the pallet holding the semi-trailer onto the wagon without cranes.

Since 2015, CargoBeamer has also operated a service of two daily trains from Kaldenkirchen on the German/Dutch border, via Switzerland to Italy and has so far operated more than 2000 trains carrying over 70,000 semi-trailers.

In June 2020 CargoBeamer ordered an additional 216 CargoBeamer wagons from German manufacturer On Rail, with an option for a further 216 wagons. The order has been financed by additional private equity and loans from UniCredit Leasing and Bayerische Landesbank.