CONSTRUCTION of the first hydrogen filling station for passenger trains in Bremervörde, Lower Saxony, will begin in September, following a ground-breaking ceremony on July 28. 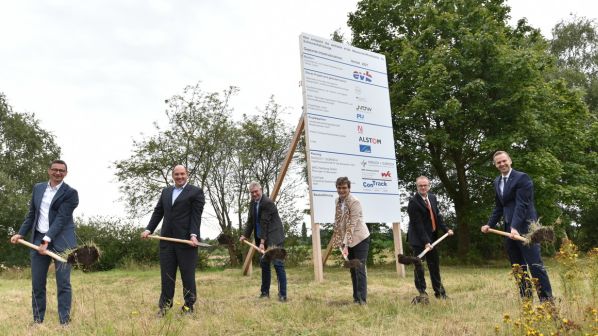 The station will have the capacity to supply up to 1600kg of hydrogen per day, and the project includes plans for further expansion which would allow hydrogen to be produced on site using electrolysis and renewable energy sources.

From 2022, the station will serve the region’s fleet of 14 Alstom Coradia iLint hydrogen trains, following the announcement that the region’s initial two trains have successfully completed an 18-month, 180,000km test phase at the end of February. The introduction of hydrogen trains is intended to provide a low-carbon alternative to existing diesel fleets.

“The introduction of hydrogen as a fuel for trains will significantly reduce the burden on the environment, as 1kg of hydrogen replaces approximately 4.5 litres of diesel fuel,” says Mr Mathias Kranz, Linde’s manager for onsite and bulk business in Germany.

“The hydrogen filling station in Bremervörde will create the basis for the series operation of our emission-free hydrogen trains on the Weser-Elbe network,” says Mr Jörg Nikutta, Alstom’s managing director for Germany and Austria.